The United States, featuring new coach Juergen Klinsmann, was drawn with Jamaica in a qualifying group from North and Central America and the Caribbean. 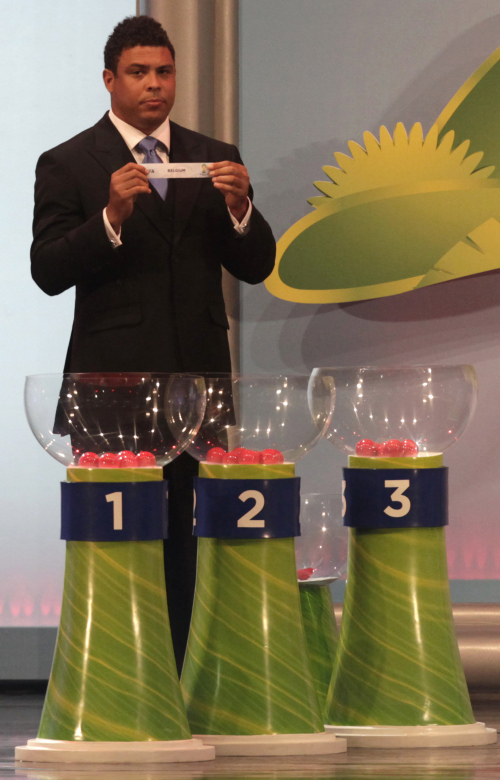 Former soccer great Ronaldo takes part in the preliminary draw of the 2014 FIFA World Cup. (AP-Yonhap News)
England was placed with 2012 European Championship co-hosts Ukraine and Poland in Group H. Montenegro, Moldova and San Marino also are in the group.

“It will be interesting, there won’t be easy matches,” England coach Fabio Capello said. “England will have to be very careful, especially against Montenegro, Poland and Ukraine.”

Italy will meet Denmark and the Czech Republic in Group B, while Germany faces Sweden, Austria and Ireland in Group C.

The draw will determine the path of 166 teams in their bid to qualify for the tournament in three years. It was the first major World Cup event in Brazil since the South American nation was awarded the competition in 2007. As host, Brazil is the only nation that doesn’t have to qualify.

“We are happy to be back in Brazil,” FIFA president Sepp Blatter said.

Spain is in a difficult Group I, the only one with five teams instead of six.

The Netherlands, last year’s runner-up in South Africa, was drawn in Group D with Turkey, Hungary and Romania, while Portugal will have to face Russia and Israel in Group F.

Group A has Croatia, Serbia, Belgium and Scotland. Greece will play Slovakia in Group G, while Norway was drawn in Group E with Slovenia and Switzerland.

The U.S. and Jamaica will be joined by two teams in Group A. Those teams will come from preliminary qualifying matches featuring Haiti, Guatemala, the U.S. Virgin Islands and five other nations.