[ The Korea Herald – Send E-mail ]
Geoje Island, paradise of Namhae
By 김윤미
Published : Jul 29, 2011 - 18:49
Updated : Jul 29, 2011 - 18:49
Geoje Island, located at the center of southern coast of South Gyeongsang Province, is often called the “paradise of Namhae” because it offers 13 beautiful beaches as well as many historical tourist sites and museums.

The country’s second-largest island, after Jeju, has beaches in both northern and southern parts of the island.

In general, visitors to southern beaches outnumber those visiting northern beaches, while all of the 13 beaches are open from July 1 to Aug. 21. 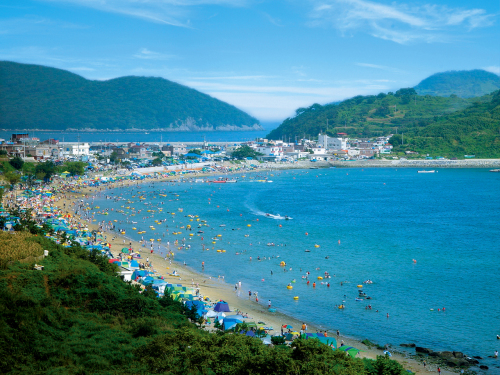 Gujora Beach on Geoje Island (Geoje City)
In the northern part, Deokpo Beach is worth visiting. The beach is 450 meters long, offering fine sand, clear water, gentle slope and old sea pine trees along the coast. There are two bathrooms, two shower buildings, one water-drinking area and a parking lot.

The most popular activity at the beach is “Zip-Wire,” linking the two edges of the beaches with a cable. Users can hold on to the cable and slide above the sea water. The activity coasts 13,000 won per person for one-way, and 18,000 won for round trip.

Nongso Mongdol Beach, located near Geoga Bridge, is the island’s longest beach stretching for 2 kilometers. Instead of sand, small and round stones called “mongdol” cover the beach, which is good for a hot stone bath.

Heungnam Beach is known for its fine sand, whereas a small Hwangpo Beach is almost like a quiet lake.

In the southern part of the island, the most popular beach is the 510 meter long Wahyeon Sand Forest Beach with many convenient facilities fully equipped. You can enjoy diverse water activities such as “Flying Fish” and “Banana Boat.” Another beach near by is called Gujora Beach.

Past the Gujora Beach to the south, you will see Hakdong Black Pearl Mongdol Beach and Hakdong Camellia Forest. The sound of the waves, hitting the small pebbles, will give you an unusual memory, especially at night. During day time, the small stones shine like black pearls.

Meanwhile, those who want to enjoy camping in the interior of the island can visit Geoje Sadeung Auto Camping Area in Sadeung-ni in Sadeung-myeon. Open in 2009, the camping park can accommodate 300 tents in four sections. There is a 20,000 won fee per night. Shower facilities are offered for free and spa is priced at 3,000 won. Those who do not have a tent can rent a room at a pension or a trailer.

You can check out a beautiful garden, Geoje Sanbangsan Biwon, after a 10-minute drive to the right of Geoje Bridge, where the trace of Emperor Uijong of Goryeo Dynasty still vividly remains.

Sitting on Mount Sanbang foothill on more than 30,000-pyeong (24-acre) of land, Sanbangsan Biwon looks like it came from another planet. The garden boasts more than 1,000 species of wild flowers, trees, shrubs and rare plant species.