“Where did he go?” I asked author Rachel Shteir, my new shopping companion.

“Now, if you wanted to steal those, you would just take the pair you came in with and place them in the box, and wear the new ones right out the door,” Shteir whispered. 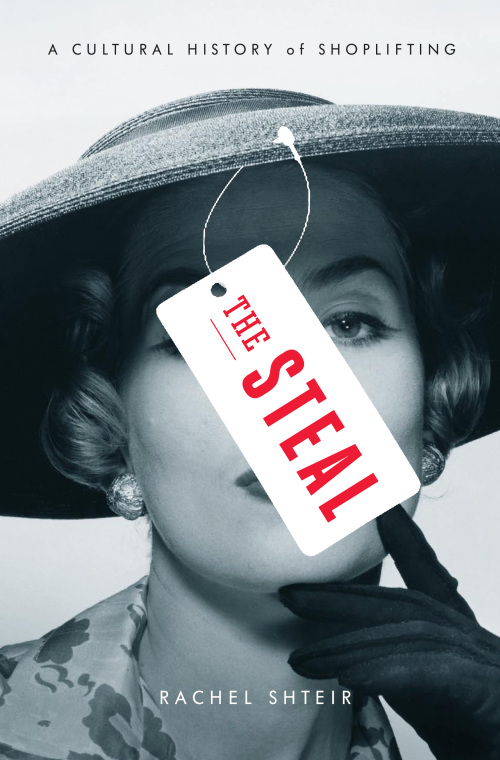 “While I was writing this book, there was a while there when I couldn’t be in a store without looking to see if someone was stealing,” she said. “I was always checking out the staff and looking for the cameras.”

One in 10 Americans have shoplifted, but only one in 49 will be arrested, Shteir said.

“The store is more concerned about getting the merchandise back than making the arrest,” she said.

While Shteir was doing her research, one shoplifter told her that he dragged rugs out of the side exit of a home improvement store. Another shoplifted kayaks by simply walking out with them, as if he had bought them. But the No. 1 item to be pocketed, according to 2003 figures (the most recent available top 10 list) from the Centre for Retail Research, in Great Britain, is Gillette razors and replacement cartridges. (No. 10 is steak, by the way.)

“The two main excuses for stealing were either compensation or addiction,” she said. “But I think entitlement is also going on ― the idea that ‘I should have this.’”

Kleptomaniacs and cocaine addicts have similar brain scans, Shteir said, which explains the rush often described by many after they steal. And shoplifting can take hold no matter what your income. The ranks of shoplifters or those suspected of it have included celebrities such as actress Hedy Lamarr (who was acquitted in a jury trial) and, more recently, actress Winona Ryder.

Ryder was charged in the theft of about $6,000 in designer clothing from Saks Fifth Avenue in 2001. She was convicted on some charges, completed 480 hours of community service, completed five years of probation and underwent drug counseling.

Shteir didn’t interview Ryder for the book, but she did examine the surveillance video and court records.

“Looking at the images of her wandering through the store is so striking because she’s so burdened down by this stuff and she kept getting more and more stuff and putting it in bags,” Shteir said. The public thinks wealthy celebrities have it all, “but they don’t really have it all in their minds,” she said.

Another example described in the book is the case of Claude Allen, a former senior domestic adviser in the George W. Bush White House. Allen, who pleaded guilty in 2006 to misdemeanor theft, stole several items, including a $525 Bose stereo, a mop worth less than $12, two bras for $9.89, and massage gloves valued at $4.99. Allen was earning $161,000 a year at the time. He resigned in 2006 and later blamed his shoplifting on the helplessness he felt when Hurricane Katrina hit New Orleans.

“Depression and anxiety are definitely contributing factors to stealing,” Shteir said. “But no matter what the reason, the overwhelming feeling that follows the rush is shame.”

Shoplifting costs families $450 a year in higher prices attributable to stores’ attempts to offset the costs of missing merchandise, according to Consumer Reports magazine. The biggest misconception about theft is that you won’t be adding to the problem if you decide to steal something small like a pack of gum, Shteir said.

“The theft of any object in a store will cost that store way more than that item’s actual retail price,” she said. “There’s all the security they have to install, and the inventory, and the people they have to hire. Not to mention the courts ― and taxpayers’ money. It’s a drain.”

“There are studies on depression and sex, and global warming has a gazillion studies,” Shteir said. “But with shoplifting, there are two big studies that are funded by the security industry, and these are from the perspective of money and funds lost, but not from the psychological reasons.”

Shteir hopes her book will fuel more research into the minds of the 27 million Americans who shoplift each year.

“There’s a judge in Tennessee who punishes shoplifting by making them wear a sandwich board type of sign that says, ‘I stole from Wal-Mart,’ in front of the store they robbed,” she said. “I guess that kind of shame works in that town because people are so horrified of being exposed.

“But I interviewed some people who were chronic shoplifters. I mean, they absolutely could not stop, no matter how big the threat. Don’t we want to know who is shoplifting and why? It seems to me that we do.”