[ The Korea Herald – Send E-mail ]
KT aims to change mobile phone distribution structure
By Cho Ji-hyun
Published : Jul 28, 2011 - 19:10
Updated : Jul 28, 2011 - 19:10
KT Corp. announced Thursday that it is introducing a set of measures, including a fair price system, to revolutionize the mobile phone distribution process that has been untouched for 20 years.

Pyo Hyun-myung, president of the mobile business group at KT, told reporters that it will publicize the price of the company’s mobile phones to its customers for them to purchase the gadgets at a fair price in all stores nationwide. 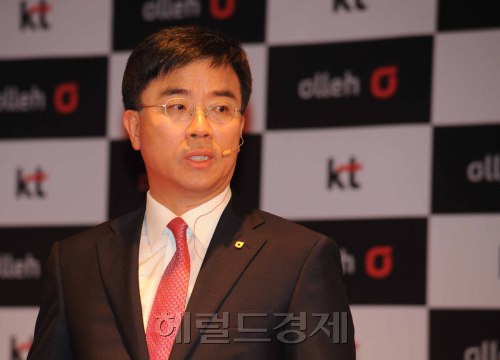 Pyo Hyun-myung, president of the mobile business group at KT, speaks about the company’s new measures to change the mobile phone distribution system at a press conference in downtown Seoul, Thursday. (Lee Sang-sub/The Korea Herald)
“Customers nowadays want to get their hands on the product before making their purchases and the outlets are applying the ‘smart’ concept to them, but the distribution structure hasn’t seen any changes in the last two decades,” said Pyo in a press conference held in downtown Seoul.

“Like the way KT triggered the ‘smart’ revolution in the past, it is willing to bring revolutionary changes to the distribution structure.”

KT has already been testing the fair price system by unveiling the prices of hot-selling smartphones and feature phones beginning on July 1.

The company is also planning to launch the green phone system starting in September, which offers discounts to customers who choose to change to used phones. A total of 22.8 million old phones are thrown away each year as people change their mobile phones more often, said its officials.

KT will open 2,500 more stores that focus on hands-on experience, consultation and education by the year-end and have the product delivered within 24 hours even when purchased online.