Sales rose 1.1 percent in June from a year earlier, the Trade Ministry said Thursday in Tokyo. The median estimate of 16 economists surveyed by Bloomberg News was for a 0.5 percent decline, with the highest estimate for a 0.6 percent gain. 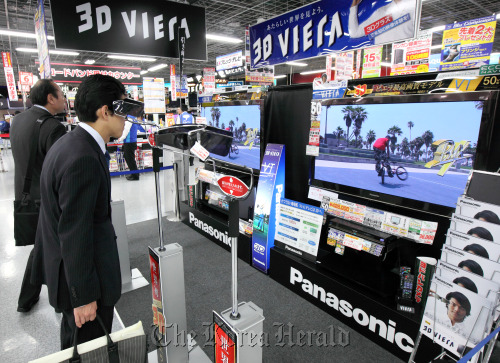 Customers look at Panasonic Corp.’s 3-D televisions at an electronics store in Tokyo. (Bloomberg)
As manufacturers including Nissan Motor Co. return to full production, consumers in the world’s third-largest economy are beginning to contribute to a recovery as well. A stronger-than- expected job market will also ensure that the spending rebound will continue, according to Daiwa Asset Management Co.

A rebound in domestic demand provides some relief for an economy whose outlook has been clouded by an appreciating currency. The yen rose to a four-month high this week, prompting policymakers to voice increased concern about a stronger currency hurting corporate sentiment and exports.

The yen traded at 77.96 against the dollar at 9:36 a.m. in Tokyo Thursday. It has risen more than 4 percent in the past three months. The Nikkei 225 Stock Average fell 1.1 percent after U.S. durable goods orders unexpectedly declined and amid an ongoing stalemate among lawmakers on raising the federal debt limit.

It was the first increase in retail sales on a year-on-year basis in fourth months. Sales increased a seasonally adjusted 2.9 percent from May, Thursday’s report showed, also exceeding economists’ estimates.