“It was a joy for us to play Wagner here,” Roberto Paternostro, the conductor of the Israel Chamber Orchestra, said after the first-ever performance by an ensemble from the country in this southern German town. 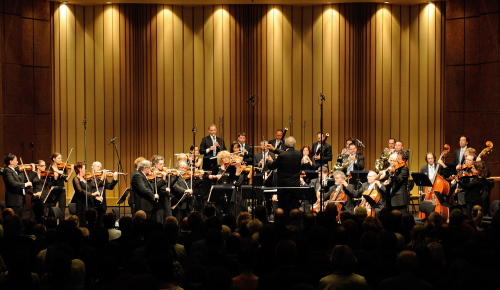 The Israel Chamber Orchestra performs in Bayreuth, Germany, Tuesday. (AP-Yonhap News)
The concert was not on the official program of the 100th Bayreuth Festival dedicated to Wagner’s works that opened with great pomp Monday in the concert hall built by the composer in the 1870s on the famed Green Hill.

However the taboo-breaking event of around two hours, dominated by music by Jewish composers like Gustav Mahler and Felix Mendelssohn but finishing with Wagner’s “Siegfried Idyll,” has been a major talking point.

Hitler was greatly impressed by the music of Wagner, who died in 1883, with its use of epic Germanic and Norse mythology, becoming a frequent guest of the family and the festival.

Wolfgang Wagner, the composer’s grandson, who died in March 2010 aged 90 after running the Bayreuth festival for 57 years, and his siblings used to call the visiting Nazi dictator “Uncle Wolf.”

The music and the composer have since been widely associated with the Holocaust, and Wagner’s work has been off-limits in Israel.

When Israeli-Argentine conductor Daniel Barenboim led the Berlin Staatskapelle in a performance of an excerpt from Wagner’s “Tristan und Isolde” in Jerusalem in 2001, dozens of audience members stormed out.

Wolfgang Wagner worked during his almost six decades in charge to exorcise the festival’s Nazi ghosts, turning it into a major event on the cultural calendar and attracting some of world’s best singers and conductors.

His daughter Katharina Wagner, who since 2009 has run the festival with her half-sister Eva Wagner-Pasquier, has vowed to take this process further, promising to open up the family archives to historians.

Katharina Wagner sat in the front row for Tuesday’s concert, and Paternostro said he had given the bouquet that he received after the concert to her.

“I just thanked her for her immense help,” the Austrian told AFP.

“I have been coming to Bayreuth every year since 1951 and we have just seen a historic moment,”Mechtild Habiger, 80, a member of the audience in Bayreuth on Tuesday, told AFP. “The standing ovation was well deserved.”

The concert has still set some tempers flaring, however.

The American Gathering of Holocaust Survivors and their Descendants said the orchestra was “tone deaf to the anguish of victims who lived through the instrumentalization of Wagner’s music in the service of spreading hate.”

Felix Gothart, a leader of the Bayreuth Jewish community, which now has about 500 members, twice the number when Hitler came to power, was also critical of the decision to invite the Israeli musicians.

“As soon as a single person was offended by the fact that Wagner is being played by Jews in Germany it would have been better to keep a lower profile,” he told AFP.

However the president of Israel’s fledgling Wagner society, Jonathan Livni, said he was delighted, saying he hoped Wagner will soon by performed freely in our country.”

Bambi Zucker, 29, who played oboe in the concert, admitted to being skeptical the project would get off the ground and said she had been nervous that hecklers would interrupt the performance.

“The music is so divine, and so great. And it is also a very important part of music history,” a relieved Zucker told AFP.