[ The Korea Herald – Send E-mail ]
Kosovo police units wait near blockades set up by Kosovo Serbs on the Leposavic-Mitrovica road on Tuesday. AFP-Yonhap News
By 윤민식
Published : Jul 27, 2011 - 18:55
Updated : Jul 27, 2011 - 18:55
PRISTINA (AP) ― Kosovo’s Prime Minister has defended an order for his special police to take control of two contested border crossings with Serbia, saying it was “the right decision” despite condemnation from the European Union.

Hashim Thaci said the operation in which a member of the police unit died and four others were slightly injured was a “concrete step in establishing the rule of law” in the volatile north.

“We cannot remain indifferent and allow that a part of our territory remains a black hole, not only for Kosovo, but for Europe as well,” Thaci told reporters. He did not respond to questions. 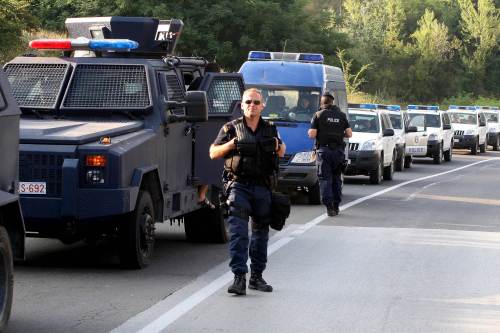 Kosovo police units wait near blockades set up by Kosovo Serbs on the Leposavic-Mitrovica road on Tuesday. (AFP-Yonhap News)
Lightly armed special police units crossed into the Serb-run north late Monday and early Tuesday in an operation aimed at placing troops loyal to the capital Pristina in a region that takes orders from Serbia as part of Belgrade’s ongoing campaign to undermine Kosovo’s 2008 secession.

Serb officials want Kosovo’s ethnic Albanian police to fully withdraw from the Serb-run north and leave Serb members of the force to man the border crossings.

Pristina, however, wants to assert control over the north and enforce a ban on goods from Serbia to counter years of a similar boycott by Belgrade in response to Kosovo’s 2008 secession ― which Serbia does not recognize.

Monday’s move by Kosovo’s police unit was met with condemnation from the European Union. It said the police action was done unilaterally and the 27-member bloc did not approve, while its 3,000-strong rule of law mission was quick to distance itself from the action.

In Washington, President Barack Obama’s administration criticized Kosovo for taking control of the crossings without coordinating with the international community, but he fell short of condemning the action itself.

The overnight operation has highlighted lingering differences within international organizations struggling to act together in Kosovo’s north.

Meanwhile, the International Civilian Office ― a body of Western countries, including the United States, that oversee Kosovo’s independence ― said Pristina is “entitled to take steps to ensure proper administration including border and customs control.”

Thaci said cooperation with Kosovo’s Western backers was important, but the country’s laws and sovereignty “go beyond any loyalty.”

Kosovo says it now controls two borders crossings with Serbia that were previously loosely managed by both EU police and Serb members of the Kosovo police.

The previous controlling forces had refused to take orders from the capital, Pristina, for fear of irritating Serbs that dominate Kosovo’s north.

Buehler was believed to have secured a withdrawal of special police units from the two border crossings as part of a deal reached with Kosovo authorities.

Pristina denied any deal was reached.

Throughout Tuesday there were reports of shootouts and skirmishes between police and local Serbs, but the claims could not be independently verified.

An ethnic Albanian policeman identified as Enver Zymberi died late Tuesday from injuries sustained when his unit was ambushed by Serbs angry at the police operation.