NFL players voted to OK a final deal Monday, days after the owners approved a tentative agreement, and the sides finally managed to put an end to the 4 1/2-month lockout, the longest work stoppage in league history. “This is a long time coming, and football’s back,” NFL commissioner Roger Goodell said, “and that’s the great news for everybody.” 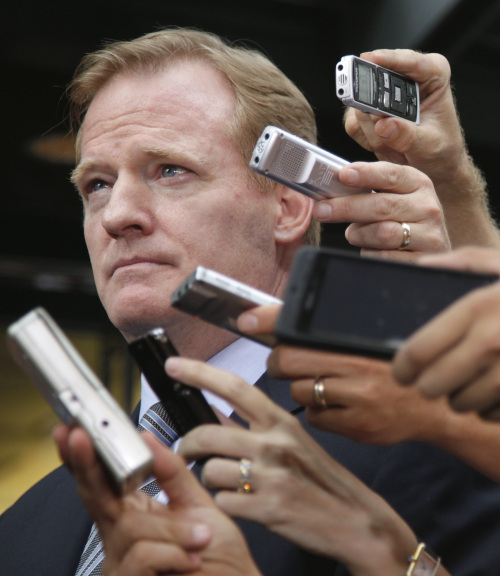 NFL commissioner Roger Goodell speaks to the media on Monday. (AP-Yonhap News)
The labor dispute comes to a close after claiming one exhibition: the Hall of Fame game between the Bears and Rams, scheduled for Aug. 7 in Canton, Ohio. Otherwise, the entire preseason and regular-season schedules remain intact. Club facilities will open to players Tuesday, when 2011 draft picks and rookie free agents can be signed.

Getting back to business could be wild. “Chaos,” said Jets fullback Tony Richardson, a member of the NFL Players Association executive committee. “That’s the best word for it.”

At a joint appearance outside NFLPA headquarters, Goodell and NFLPA head DeMaurice Smith shook hands, surrounded by some of the owners and players who were involved in the talks. They spoke shortly after the NFLPA executive board and 32 team reps voted unanimously to approve the terms of a 10-year deal. “We didn’t get everything that either side wanted ... but we did arrive at a deal that we think is fair and balanced,” Smith said.

Owners can point to victories, such as gaining a higher percentage of the more than $9 billion in annual league revenues, one of the key issues throughout. Players persuaded teams to commit to spending nearly all of their salary cap space in cash and won changes to offseason and in-season practice rules that should make the game safer.

If there was one unexpected moment during the press conference it was certainly Indianapolis Colts center Jeff Saturday’s eloquent tribute to New England Patriots owner Bob Kraft.