Got something to say? Gwangju International Center might be in touch.

From journalism to jogging your memory, the GIC Talks is an eclectic series of lectures coming mostly from the foreign community.

The talks started in 2003, and at the time there were less than 10 people coming. Things began to pick up when the organizer Shin Gyong-gu recruited Kim Dong-hun to help out.

“We were pretty short-staffed and I had to do all the work myself ― emcee the program, take a note of the talk, invite the guest speakers to the program, and so on,” said Kim.

Kim said he worked hard to get exposure for the talks, and make sure they were interesting. He also made them more regular ― weekly instead of twice a month.

“In 2003 it started with seven or eight people and in about a year it was held with the attendance of 50 to 60 people,” he said, adding that some had more than 100. “I am glad to know that more people showed more interest in the program and actually enjoyed it during and after the program.”

Kim moved away from Gwangju, and although he said he would like to volunteer again some day he no longer attends.

These days there are four Korean and two foreign organizers. Among them is Hughie Samson, who with Rachelle Braun hosts a question and answer sessions after each talk.

“Basically, it is our job to help the speaker and the audience communicate,” Samson explained.

“If English were the first language of everyone present, our work might not be so important, but because it isn’t, we try to make sure everyone understands each other.”

The GIC’s Moon So-eun said that the talks were started to promote understanding between cultures. Sometimes this gives the people there extra insight into current affairs. 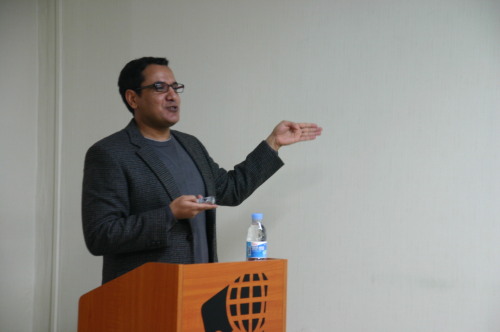 Mahmoud Abdul Ghafar, professor of Arabic at Chosun University, speaks in March about the political situation in his native Egypt. (GIC)
“For example, this year in March we contacted professor Mahmoud Abdul Ghafar from the Department of Arabic at Chosun University to give a GIC Talk about the political situation of his country, Egypt,” Moon explained.

Moon said that usually foreign residents of the area gave the talks, but that they had also asked ambassadors, and this summer there were lectures from visiting professors from the U.S. and Russia.

“I think that the most popular for many are those during which people ― expatriates, usually ― talk in general about their home countries,” Samson said.

“I also really like those given by visiting academics. Back in Canada I often attended free public lectures. The university I lived near offered them frequently ― as did our local library. As a result, each time an academic visits the GIC and speaks it almost feels like being back home.”

Samson said that the people who came to the talks changed each week, depending on who was speaking.

“Because the space in which the Talks are held doubles as an art gallery, exhibition openings are also held and they can be quite popular,” he said. “I would estimate that 70 to 80 percent of the audience is composed of Koreans each week and that various expatriates make up the rest.”

“People have different reasons for attending. Some like to practice their English listening skills, while others just like to learn new things.”

The organizers picked the talk by professor Min Young-kyoung, an ESL writing specialist at the University of Washington at Bothell, on writing across cultures as one of the best recent lectures. She compared the use of imagery by students from different backgrounds. 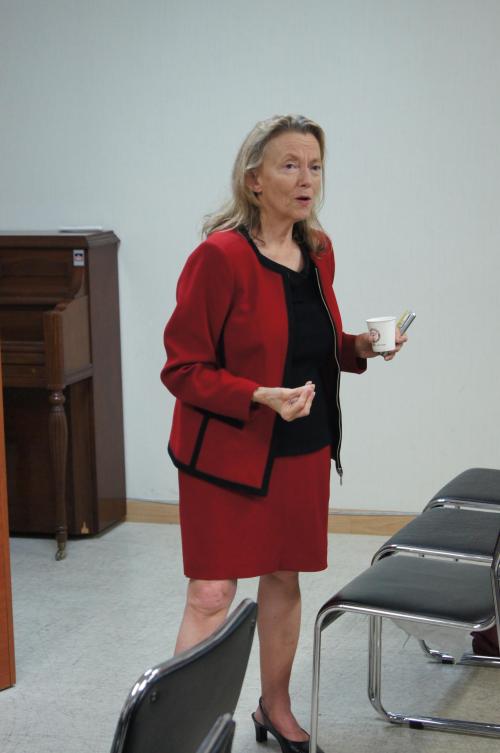 The talks used to be followed by a yoga session, this has ended. However, Moon said that the GIC space was still used by people who wanted to do things for the local community such as language classes and drawing workshops.

To find out what lectures are on and details of how to attend, visit www.gic.or.kr.