Men who are risk-takers or easily sexually aroused are also more likely to wander. For women, relationship factors seem to be most important factor, according to the research by U.S. and Canadian scientists. 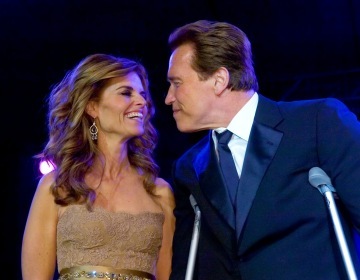 Maria Shriver (left) and Arnold Schwarzenegger smile together at the Governor's Inaugural Ball at the Sacramento, California, Convention Center on Jan. 5, 2007. Schwarzenegger and Shriver have since split and fresh allegations of infidelity by Schwarzenegger have arisen. (MCT)

The study conducted by Robin Milhausen of Guelph University in Ontario, Kristen Mark and Erick Janssen of Indiana University, was published in the journal Archives of Sexual Behavior.

For both men and women, personality characteristics and interpersonal factors are more relevant predictors than are religion, marital status, education or gender.

“This research shows that demographic variables may not influence decision-making as much as previously thought -- that personality matters more, especially for men.”

The study is the first to look at how demographics, interpersonal factors and sexual personality affect infidelity.

It involved 506 men and 412 women who reported being in monogamous sexual relationships lasting from three months to 43 years.

Participants were asked to report on demographic variables such as religion, education and income. They also completed scales that measured sexual personality variables and answered questions about their relationships.

The study found little difference in rates of infidelity reported by men and women (23 and 19 percent, respectively). But different things predicted the behavior for men and women.

For men, significant predictors of infidelity are personality variables, including propensity for sexual excitation (becoming easily aroused by many triggers and situations) and concern about sexual performance failure.

For women, relationship happiness is paramount. Women who are dissatisfied with their relationship are more than twice as likely to cheat; those who feel they are sexually incompatible with their partners are nearly three times as likely.

Milhausen cautions against misinterpreting or overemphasizing the study’s findings. “Taken at face value, this research might seem to just support sexual stereotypes: Women are just concerned about the relationship, and, for men, once a cheater, always a cheater, regardless of their relationship. But the caveat is that there are a lot of variants and factors that are not explained here that might impact whether someone cheats.”