Sang, 62, a southerner who was a former mayor and party chief in Ho Chi Minh City, had most recently served as the de facto No. 2 in charge of the Communist Party, running the day-to-day affairs. 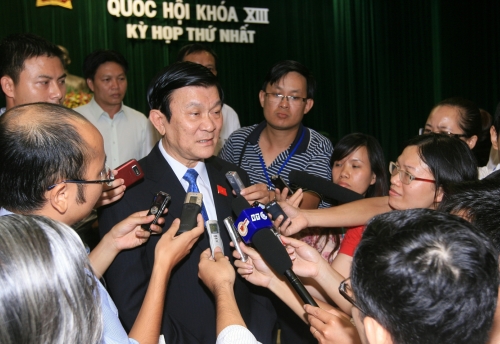 President Truong Tan Sang  (Xinhua-Yohap News)
His appointment, receiving more than 97 percent of the vote as the sole candidate, was widely anticipated. Monday’s announcement was largely ceremonial since the position was already decided by the party’s elite in January during the secretive Party Congress held every five years.

Sang, from the southern province of Long An, replaces retiring President Nguyen Minh Triet. The presidential role is mostly ceremonial, while the prime minister runs the country’s day-to-day operations.

After giving his acceptance speech, Sang nominated current Prime Minister Nguyen Tan Dung, 61, for a second term, expected to be announced Tuesday. Sang was said to have challenged Dung for the premiership, but he lost out when the leaders were picked in January.

Vietnam is a one-party system that does not tolerate any challenge to its rule, and publicly calling for a multiparty system can result in long prison sentences.

The appointment comes a day after Vietnamese protesters demonstrated against China for the eighth straight week as tensions between the communist neighbors continue to simmer over disputed territory claimed by both countries in the South China Sea.

Last week, China and the 10-member Association of Southeast Asian Nations agreed to a preliminary plan to work together to resolve disputes in the potentially resource-rich South China Sea that’s home to vital shipping lanes.

Vietnam, one of Asia’s fastest-growing countries, also faces domestic pressure as it struggles with wide-ranging economic woes. It is battling huge trade and current account deficits, a weak currency and double-digit inflation that’s squeezing the country’s poor by driving up food prices.

Sang was imprisoned from 1971-73 by the U.S.-backed South Vietnamese government when he served as a communist fighter for the north during the Vietnam War. It ended in 1975 when the north seized control of the former southern capital, Saigon, reunifying the country.