The 71-year-old ― imbued with boundless energy, curiosity and cool-cat poise ―is a natural for the job. His “The Imagine Project” album is a multicultural potpourri featuring collaborations with musicians from 11 countries and seven languages. He founded The International Committee of Artists for Peace, too.

“It feels like an answer to some of my biggest dreams,” the pianist and composer told the Associated Press about his Friday appointment as a UNESCO Goodwill Ambassador. 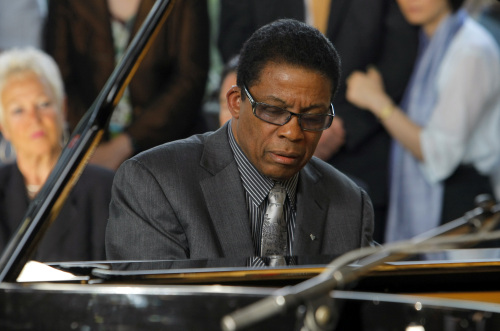 U.S. Jazzman Herbert Jeffrey “Herbie” Hancock plays the piano during the ceremony for his new role as a UNESCO Goodwill Ambassador at the UNESCO headquarters in Paris, Friday. (AP-Yonhap News)
UNESCO “really cares about working toward the globalized peaceful world that people actually want to live in.”

There have been dozens of celebrities across the world promoting the goals of the Paris-based U.N. Educational, Scientific and Cultural Organization, but Hancock said he doesn’t mind being a link in a long chain at one of the U.N.’s lower profile institutions.

In fact, much is expected of him.

“This is not a free lunch,” UNESCO Director-General Irina Bokova laughingly advised him at a lunch before his formal appointment. There’s a lot for him to do, she said, but “he believes it. He’s doing this already.”

As a Goodwill Ambassador, he expects to do more than be a musical envoy. He wants to promote literacy through the discipline of his art, Hancock said.

Projects are already on his plate: He is working to create an International Jazz Day, something that could see fruition by next year; establish jazz as an “intangible cultural heritage” of UNESCO; and work to get UNESCO World Heritage site recognition to New Orleans, his hometown of Chicago and Dockery Farms in the Mississippi Delta ― a plantation community that gave birth to the Blues.

He also wants to make his world stage a world classroom, hoping to travel to places like India, Cambodia and countries in Africa, the Middle East and Eastern Europe. His goal of seeking peace fits his Buddhist beliefs and his relationship with his audience, he said.

“Before I go on stage, my prayer is for the band to be as one, to have a unified spirit and ... for the purity that’s in the depth of the heart to touch the depths of the people in the audience.”

He will not forsake his music. In his more than half-century career as a musician, he has renewed old favorites with edgy electronic sounds, giving new life to signature pieces like “Watermelon Man.” He performed at La Scala this year and plans classical orchestral concerts focused around George Gershwin’s “Rhapsody in Blue.”