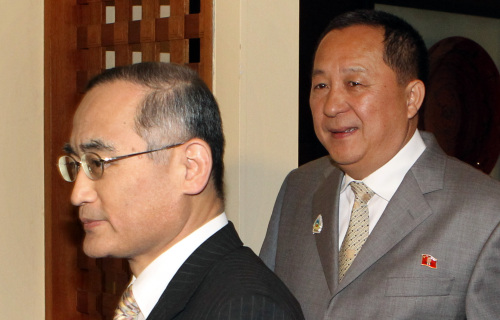 The agreement came after a rare, two-hour meeting between South Korean chief nuclear negotiator Wi Sung-lac and his North Korean counterpart Ri Yong-ho on the sidelines of the ASEAN Regional Forum in Bali.

"During the talks, we agreed to make joint efforts to reopen the six-party talks as soon as possible," Ri told reporters after the talks.

The two sides also reaffirmed their "willingness to implement" the 2005 statement in which the North agreed to give up its nuclear program, Ri said.

Ri said the talks were held in a "frank and serious" mood.

Wi echoed Ri's view, saying "I had a very constructive and useful conversation with my counterpart."

"We agreed to continue to make joint efforts in the process of negotiations for denuclearization," Wi told reporters.

The six-party nuclear disarmament talks, involving the two Koreas, the U.S., China, Japan and Russia, have been stalled since late 2008 after North Korea stormed out of the process after a new round of U.N. sanctions.

Until now, the North has refused to discuss its nuclear program one-on-one with South Korea as Pyongyang has so far used its nuclear weapons program as important leverage to improve ties with Washington.

South Korea, the U.S. and other six-party members are pushing to reopen the six-party nuclear dialogue forum in a three-step approach in which North Korea will meet with South Korea first, then the U.S., for one-on-one talks on denuclearization.