[ The Korea Herald – Send E-mail ]
At home in Turkey: Staying with villagers in Kurdistan
By 김후란
Published : Jul 22, 2011 - 18:41
Updated : Jul 22, 2011 - 19:57
Before most people are awake, Pero Salva has baked a day’s worth of bread over an open fire, milked the cows, fed the chickens and used a broom made from twigs to sweep the dirt walkway in front of the house she shares with her husband and three children.

As the roosters crow and a muezzin sings the Muslim call to prayer, we take our places for breakfast on the floor around a table fashioned from a sheet of vinyl spread over a woven rug. Men on one side. Women on the other.

Everything before us ― tomatoes and cucumbers, cheese, yogurt, honey and sheets of warm bread ― was made or grown by the family, our hosts for a one-night homestay in the village of Yuvacali in Turkish Kurdistan.

Situated in the middle of Mesopotamia ― the flat, fertile plains between the Tigris and Euphrates rivers that were a cradle of civilization ― the towns and villages of southeast Turkey trace their history around 10,000 B.C. when bands of hunter-gatherers settled into communities and became the first farmers. 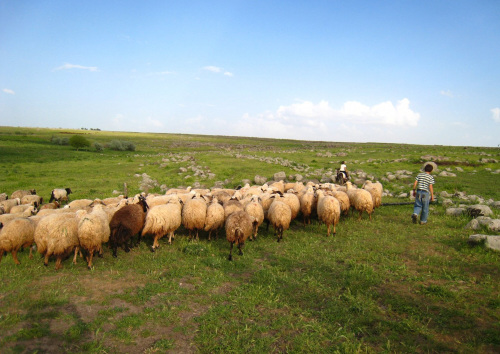 Most Kurdish families in Yuvacali in southeastern Turkey keep a flock of sheep and use the milk to make yogurt and cheese. (Seattle Times/MCT)
Originally nomadic sheep and goat herders, the Kurdish have their own language and cultural traditions, much of which was suppressed after Turkey became a republic in 1923 and the government pushed to unite ethnic groups under a national identity

Migration to the cities was encouraged, leaving rural outposts such as Yuvacali, first settled more than 6,000 years ago, alone and on their own, often without basic services such as running water and electricity.

It wasn’t that long ago that, “Children would go to school not knowing Turkish, and not knowing how to hold a pencil,” says Bridget Purcell, an American anthropologist who volunteers as a translator for homestay guests.

Traipsing about on a farm, learning how to milk sheep and bake bread while wearing an ankle-length skirt, wasn’t part of the itinerary when my husband, Tom, and I began planning a trip to Turkey. But then I found Nomad Tours Turkey on the Web while doing some research, and emailed the founder, Alison Tanik, a British woman married to a Kurdish man.

She and her husband, Omer, had moved from Istanbul to his home in Yuvacali when they began looking for a project that might help improve the lives of the 700 or so residents, mainly subsistence farmers with an average income of $1 per day.

Nearly everyone intermarries. (Villagers share just three last names). Disputes are settled by tribal elders. The rate of birth defects is high. There’s no sewage system. No garbage collection. No high school. No Internet. Only 50 percent of villagers read or write.

Alison had launched a project for the local women to sell their handicrafts to a boutique in Istanbul, when an acquaintance from Australia’s Intrepid Tours asked about the possibility of homestays in the area. She suggested Yuvacali, and Nomad Tours was born.

Painted bright lavender, a favorite color in this part of Turkey, the Salva family’s one-story, concrete house has a small kitchen and two rooms ― one used by the family for living, watching TV, eating and sleeping, and the other for guests. The toilet is an outhouse and running water comes from a tap connected to tank on the roof filled with water pumped from a well.

Sitting in the garden, sipping tea, we joined six other guests traveling together on an Intrepid tour, and talked with Pero, 45, and her husband, Halil, 46.

Hosting and cooking for groups of strangers is hard work, Pero said, but it means she no longer has to pick cotton and gets to work indoors, a relief in summer when temperatures can top 100.

She greeted us wearing a wispy lavender head scarf, a long polka-dot skirt and blue sweater set. Halil wore traditional Kurdish-style trousers, baggy in the crotch and tight around the legs.

Villagers aren’t particularly religious, but they are conservative. The women in our group followed Nomad’s instructions to wear long skirts, considered more modest than pants for sitting on the floor or milking animals.

Like most of the married villagers, Pero and Halil are first cousins. They support themselves and their children, Faruk, 18; Fatih, 17; and Aylin, 10, by growing barley, wheat, lentils, cotton and peppers and raising sheep, chickens and cows. Before the homestays, their only outside income came from the sale of the cheese and yogurt that Pero makes in a hut where she also does the cooking over a wood fire.

For lunch we ate her homemade lentil soup and roasted vegetables and talked about the differences in our home lives. The nearest big city is 35 miles away, and like most women, Pero rarely leaves the village. Men do the shopping and most other jobs that require going to town.

Walking around the village, past flat-roofed houses made of mud bricks, we saw women seated on the ground sewing cotton mattresses by hand. Others were herding sheep in from the pastures. Only women are allowed to bake bread and milk the animals, so the men in our group could only watch as we helped Pero milk, and joined her at a low table to roll out big circles of dough.

Dinner was “Turkish pizza,” sheets of the thin, round bread topped with minced meat and herbs. Afterward, the family converted the dining room into a bedroom by blanketing the floor with floral-covered cotton mattresses filed with sheep’s wool. We snuggled under the covers slumber-party style, women in one room, men in another, while the family slept in an annex they built for themselves off the main house.

The Yuvacali homestay project is small. So far, there are just two host families, but the homestays have done much to bring a bit of the outside world to Yuvacali.

Nomad Tours has used the income to buy supplies for the school (the government supplies only a building and a teacher), and launch a dental-hygiene project, with toothbrushes and toothpaste donated by homestay guests.

Neither Pero nor Halil read or write, but their children go to school and are learning English. All the money they earn from the homestays goes to pay for their education.

The result: Faruk plans to enter college next year, and Fatih, who walks three miles each way to high school, will forgo his usual job at a beach resort this summer to stay home and hone his English skills.

He is preparing for what everyone hopes will be his new career: official village homestay host.

Where: Yuvacali is near Sanliurfa, a city in southeast Turkey where the prophet Abraham supposedly was born. A visit could be combined with a trip to Mount Nemrut, noted for its large statues built around an ancient royal tomb, or Gobekli Tepe, where archaeologists have uncovered the remains of an 11,000-year-old temple.

By Carol Pucci, The Seattle Times