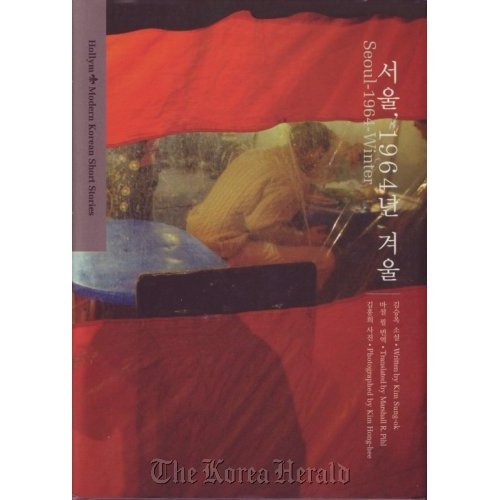 
Seoul in the 1960s was going through many changes. It was recovering from the war, experiencing rapid industrialization under the authoritarian government, and receiving growing number of people from the countryside who were looking for more opportunities in the nation’s capital. It was also the period where its residents first became to be aware of individualism, aside from the shared experience of the war, realizing one’s experience in the city can be in fact very different from the other.

Author Kim Seung-ok’s 1965 novella “Seoul-1964-winter”is a literary record of Seoul in the specific time period, telling a story of three men who happen to meet in a drinking tent one cold winter day in 1964 Seoul. The three men are: Kim, a 25-year-old man who works as a clerk for the city hall; Ahn, another 25-year-old graduate student who is from a wealthy family; and a nameless, impoverished book salesman in his 30s whose wife just died of an illness that day. He sold his wife’s dead body to a research hospital for money.

The three men make small talk about random things, about Paris and moving creatures, until the book salesman asks the others to hang out with him for the rest of the night. He is clearly seized by a sense of guilt and helplessness, about what he’s done with his dead wife’s body. Having decided to spend away the money he made in exchange for the body of his wife, the book salesman, along with two young reluctant strangers, walk around the Seoul streets to purchase random goods, including ties and a box of tangerines.

While the three spend their time together, the two young men are unwilling to ― or almost incapable of ― empathizing with the salesman’s personal tragedy. The young men never talk about themselves, only talking about what they know or feel. The small talk on random topics fail to connect the characters together, isolating each character in their own world. While the three all reside in Seoul, they do not share common experiences or problems, mostly because each comes from a different economic background. Even when they check into an inn by the end of the night, as the salesman tells the two young men that he’d appreciate their company for the night, they sign up for their own rooms instead of staying in one suite together.

Kim Seung-ok was born in 1941 in Osaka, Japan and moved to Suncheon, South Jeolla Province in 1945, after Korea’s liberation from Japanese colonial rule. He was admitted to Seoul National University’s French literature program in 1960, and made his literary debut with his first short fiction, “Practice for Life” in 1962. He enjoyed immense success in his literary career throughout the 1960s and 70s ― winning both prestigious Yi Sang and Dong-in Literary Awards ― but quit writing during the 1980s and converted to Christianity. Kim is considered one of the very first writers to be educated in Hangeul, the Korean writing system, and enjoy successfully using that instead of Chinese characters.