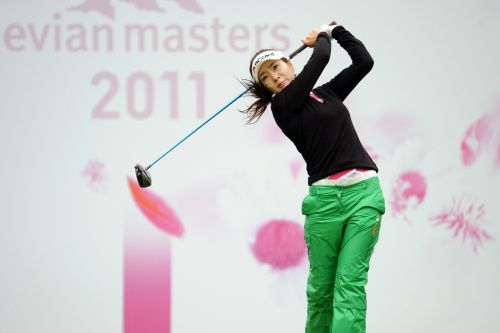 Ahn Shin-ae of South Korea hits a drive during the Evian Masters Golf Tournament in Evian-les-Bains, French Alps on Thursday. (AFP-Yonhap News)
Stupples, who won her only major in 2004, recovered well from a double bogey on the ninth hole to make six birdies for a 30 on the back nine as heavy rain soaked the course at regular intervals during the day.

“Obviously the weather was pretty grim to start with. It’s been a while since I’ve played in conditions like that,” the 38-year-old Stupples said. “After I made that double bogey on nine, it was almost like the kick I needed to get going.”

Cristie Kerr, the 2007 U.S. Open champion, had a consistent day with six birdies and only two bogeys for a 68, tied with 2009 champion Ai Miyazato of Japan.

Defending champion Jiyai Shin of South Korea made a solid start with a 69, including three birdies in the first four holes, before bogeys on No. 6 and 8 slowed her down. The 23-year-old Shin is still looking for her first title of the year.

Stupples used the pace of the slick, rain-soaked greens to her advantage to shoot a brilliant 30 on the back nine, after going out in 37, where she had a bogey on the sixth hole.

“With the kind of rain we’ve had here, it’s made the greens a bit like dart boards, so you can really fire at all the pins,” she said. “I was hitting my irons well, confident with my putter too. The greens are absolutely perfect, I’ve never seen them in as good a condition as they are now.”

Kerr, who was third at the recent U.S. Open, has yet to win a tournament this season. She finished runner-up at three consecutive tournaments ― the Sybase Match Play Championship, ShopRite LPGA Classic and State Farm Classic.

Kerr feels a tournament win will come if she stays patient.

“Just trying not to put too much pressure on myself and execute well,” she said.

“I’ve been putting great today. The greens are the fastest they’ve ever been, and I’ve been playing here for 15 years,” Hjorth said. “I played really solid, obviously not the finish that I would have liked. But you could have three bogeys anywhere. But I take five-under any day.”

Kraft Nabisco champion Stacy Lewis looked well set to take the lead at 6-under with four holes remaining, but a double bogey on the 15th meant she finished the day level with Shin and five others on 69.

“I played really well for 14 holes,” Lewis said. “I just missed a couple of short putts and hit a bad chip and that kind of compounded my mistakes. The weather was all over the place: it was rainy, it was cold, it was hot.”

Lewis lost balance as she was preparing to tee off on the 15th, and then lost more ground after a bogey on the 18th.

“Off the tee my foot slipped a bit and I pulled my tee shot,” she said. “It was a bad chip. I chipped in earlier in the day so it wasn’t like my chipping was bad today, I just hit a bad shot.”

Michelle Wie struggled with a double bogey, three bogeys, and only one birdie in a 4-over round of 76.

Wie first played at the event in 2004 as an invited 14-year-old amateur, and she tied for second the following year behind winner Paula Creamer ― who ended the day with a 2-under 70.