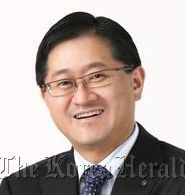 Amore Pacific CEOSuh Kyung-bae
The nation’s largest cosmetics manufacturer, however, made it clear that nothing had been decided regarding the potential takeover.

“The possible takeover will pave the way for us to go global in the mid- and long-term, even though we are currently focusing more on the Asian market,” a company official told The Korea Herald. “If officially decided, it will be the company’s first case of merger and acquisition.”

Annick Goutal, named after a French pianist, is a highly upscale brand whose handmade products are priced at almost 200,000 won per a 100 milliliter bottle. Its sales revenue last year was estimated to be worth about 20 billion won ($19 million).

“It’s not a big company. However, considering perfume means a lot to French women, having the luxury brand name will be an advantage for the company,“ said the official.

In 1997, Amore also launched a perfume brand called Lorita Lempika in a brand licensing with a French designer. The production of the perfume is conducted only in France, targeting mainly the European market.