“I’m the first Korean CEO in the 60-year-old history of Siemens Korea. The headquarters may have thought a native would know better about the local market and respond faster to it,” Kim Jong-kap, chairman and CEO of Siemens Korea, said during a news conference. 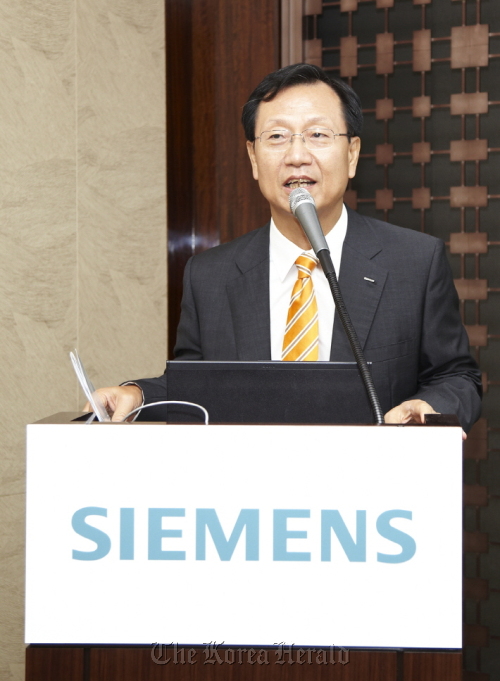 New Siemens Korea CEO Kim Jong-kap speaks at a press meeting in Seoul on Thursday. (Yonhap News)
The German electrical engineering giant has recently replaced the heads of its affiliates in Korea, Japan and China with natives of the countries, including the former head of Hynix Semiconductor.

And the rare decision of a European company may reflect the increased importance of the Asian market as well as its new strategic direction to get closer to customers, Kim said. (He added he had to undergo seven interviews before he took office on June 1.)

“In particular, the faster growing Korea will see more opportunities than Japan. While multinational companies in Japan focus mostly on the domestic market, those in Korea, including Siemens, are also active in overseas projects,” he said.

“That is why Korea, despite its yet smaller size in sales, is always considered one of the major branches among Siemens’ more than 190 affiliates globally.”

Its core business sectors include building technologies, healthcare infrastructure centered on ultrasound-wave equipment and lighting business of its separate affiliate OSRAM, with a total of six research facilities operating nationwide.

“The total investment volume is not so high for now. But I expect the size will continue to grow,” he said.

The Korean affiliate, which currently hires some 2,000 employees, plans to increase the number by 10 percent this year, Kim said.

“A cooperative relationship with local companies are essential for Siemens’ future growth in the long term. Strengthening such a strong partnership and profiting from it may be one of the missions that the headquarters expects from me,” he said.

The CEO also welcomed the growing market dominance of Samsung in the healthcare sector, saying that the expansion of the overall market will offer more opportunities to the already leading company as well.

“My competitors are other Siemens affiliates in China or in the U.S. My goal is to attract more investment and resources into Korea by promoting the potential and benefits of the Korea market,” he said.

About the fierce bidding war surrounding Hynix Semiconductor, Kim advised a “decisive and prompt” decision to be made.

“It may be an investment followed with risk factors. But I’m also sure about the promising future of the nation’s semiconductor sector. Considering the huge impact across industries, a bold decision should be made promptly.“