[ The Korea Herald – Send E-mail ]
Iconic ‘Gone With the Wind’ dress faded forever
By 김후란
Published : Jul 21, 2011 - 18:15
Updated : Jul 21, 2011 - 18:15
AUSTIN, Texas (AP) ― Efforts to preserve and restore several iconic dresses from the Oscar-winning Civil War movie “Gone With the Wind” have uncovered what might be painful for die-hard fans: Some of them simply can’t be made to look like they did on screen.

Stitching and holes can be repaired and extra feathers added years ago can be removed, but the dresses are old, badly faded in spots and in one case, just too fragile to handle.

The Harry Ransom Center at the University of Texas announced a $30,000 effort last year to preserve five of the dresses acquired with the collection of film producer David O. Selznick in the 1980s. The goal is to have them ready for a 2014 exhibit to mark the film’s 75th anniversary.

Ransom Center officials this week gave The Associated Press a look at the work being done to bring them back to the best shape possible.

The costumes are among the most famous in Hollywood history and played a key role in one of the most popular films ever. The Ransom Center holds five dresses it wanted to restore for display: Scarlett O’Hara’s green curtain dress, her green velvet gown, a burgundy ball gown, a blue velvet night gown and her wedding dress.

“They are culturally important,” said Cara Varnell, an independent art conservator who specializes in Hollywood film costumes and is doing the restoration work. 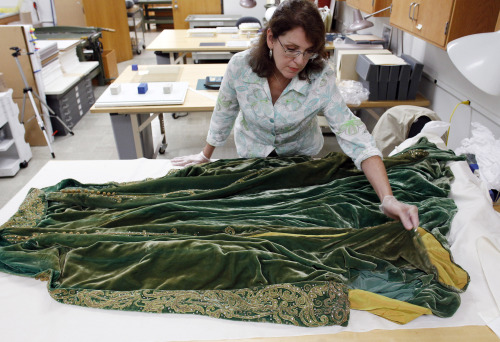 Cara Varnell, an independent art conservator who specializes in Hollywood film costumes, works with the green velvet gown from the film “Gone With the Wind,” on Tuesday in Austin, Texas. (AP-Yonhap News)
Varnell has meticulously studied the dresses worn by actress Vivien Leigh and has tried to decode alterations done over several generations. The waistline of the green curtain dress has been altered several times. Extra feathers had been sewn onto the burgundy ball gown.

Varnell knew the dresses would be in rough shape. They had been put through their paces well before they arrived at the Ransom Center.

Selznick, realizing he had a “gold mine on his hands,” put the dresses on tour with the film, said Ransom Center film curator Steve Wilson. They went through decades of traveling displays and had been on loan to the Metropolitan Museum of Art in New York. They were dry-cleaned multiple times, sprayed with disinfectant and displayed in department stores.

All of that put stress on outfits not designed to take the beating of everyday wear and tear.

A conservation assessment done when they first arrived at the Ransom Center in the 1980s deemed them too fragile to display. Varnell said the Ransom Center has since then properly kept them in temperature-controlled storage.

One of the most vexing questions is figuring out what caused curtain dress to develop long faded streaks that have turned sections of the fabric a color best described as a brown mustard.

Varnell is convinced they are not caused by light damage because the fabric in those places does not appear to be dried out or fragile in ways that would be typical of light exposure.

Records show that the dress was likely sprayed with Sudol, a disinfectant similar to Lysol, which may have affected the rate and nature of the discoloration.

The Ransom Center has enlisted the help of the University of Texas’ textiles and apparel technology lab to analyze the fibers in the faded areas. New technology will allow the fibers to be examined without being destroyed, Varnell said.

There will be no attempt to try to restore the curtain dress to its original shade of green, Varnell said. Her job is to keep the dresses sturdy enough to endure in as close to their original form as possible, not to try to recreate their precise look on the silver screen.

When on display, the public may be disappointed to see the beloved dress with its faded flaws instead of the vibrant green material they remember from the movie

The dress’s travels and its faded spots are “part of its history,” Varnell said.

“In a way it doesn’t matter. What matters is to solve the mystery ... but it will never be the same. We do not add color back,” Varnell said. “That would be me, this lone individual in the 21st century, deciding what that was going to look like 75 years ago. It’s unethical. You just don’t do that. This is part of its history. We honor the history and we honor the piece.”

Wilson said the public should still enjoy seeing the original dress, even a faded one, when the work is finally done. The fading hasn’t damaged the entire collection. The burgundy ball dress has retained its luxurious color.

“They still have an incredible and powerful magnetism, regardless of their color,” Wilson said of the entire collection.

Wilson said the Ransom Center is hoping the public can send old photographs - particularly in color - or share stories of when the dresses were on display that might help complete the record of all that the dresses have been through.

One piece that cannot be restored is Scarlett’s silk wedding veil. It was brittle and lined with permanent creases when it was acquired and is now so fragile that it will likely disintegrate if handled.

“We are all organic material,” Varnell said. “When a costume has come to the end of its life, it is no different than we are.”