What can a moon jar, Hangeul and Gen. Douglas MacArthur possibly have in common?

“They are all connections of some sort. Moon jars are composed of the top half and the bottom half, Hangeul is composed of vowels and consonants and Gen. MacArthur came in and the peninsula was divided into two,” Kang Ik-joong told the press on Wednesday. 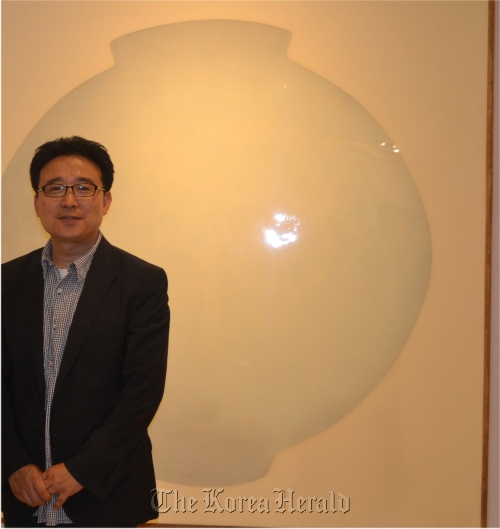 Kang Ik-joong poses in front of his work “Moon Jar.”( Kang Ik-joong)
Those are some of the major materials used by the South Korean artist whose retrospective exhibition opened the same day at POSCO art museum in the POSCO building in Daechi-dong, southern Seoul.

At the exhibition titled “Ik-joong Kang: A Retrospective (1996-2011),” 23 of his representative paintings, installations and sculptures featuring the artist’s “staple food” ― Hangeul, moon jars, Gen. MacArthur and children’s paintings ― are on display.

“What I feel like I have been doing is that I have been brewing Seolleongtang (ox bone soup) for a long time and just ladled out a bowl when a customer came across. I didn’t prepare something new but just pulled out what I already had. I was worried what those would be, but now that I look at the show, important pieces from my earlier works to the most recent moon jar which I finished last week are included,” said Kang.

Kang is one of most globally well-known Korean artists. He represented the country at the 1997 Venice Biennale, where he was awarded The Special Merit Prize. He held numerous exhibitions in and out of Korea including the memorable two-person show which he held with late media artist Paik Nam-june at the Whitney Museum of American Art in 1994, titled “Multiple Dialogue.” The 2011 project “Amazed World” at the United Nations headquarters, in which he collected and displayed children’s paintings, was highly acclaimed as well.

The retrospective at POSCO is diminutive in size but not in quality. From 3 inch wide and 3 inch long canvas pieces which Kang used to paint while shuttling on the subway to and from Pratt Art Institute, New York, in the 1980s, chocolate-covered Gen. MacArthur which was introduced at the Whitney Museum in 1997, to the moon jar installation work just last week, the exhibition shows the essence of Kang’s art world.

About works that are only completed by assembling together the divided parts, like Hangeul or Moon Jar, he said that “they are a sort of secret code for the unification of Korea.”

“If the North and South were a body, someone came, stabbed the stomach and divided it into two. Instead of pulling out the knife ourselves, we asked those who stabbed it to do it for us. We lacked courage,” he said.

“Some ask why I, an artist, am doing politics. I am not. I just think that art has three roles, first, to awaken, second, to connect and third, to heal.”

His works comprised of children’s paintings are a good example of his approach to art as healing. So that “children who cannot go out due to their weakened immune system can communicate through art,” Kang installed collections of such paintings in several hospitals worldwide including Cincinnati Children’s Hospital Medical Center in Ohio, Asan Medical Center in Seoul and even some in Lebanon and Afghanistan. 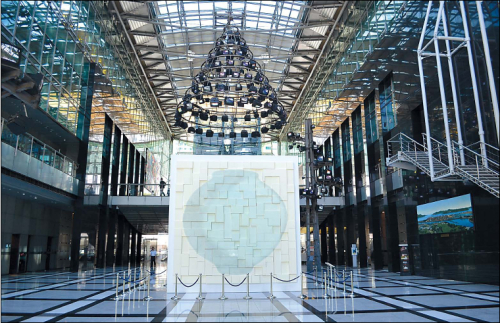 Kang Ik-joong’s “The moon is high up at Seolleung” is exhibited in the lobby of the POSCO building, below Paik Nam-june’s1995 work “TV Chandelier.”  (posco art museum)
For the exhibition commemorating the 43rd anniversary of the establishment of POSCO, Korean steel giant, the museum used the first floor lobby as additional exhibition space. A five meter wide and five meter tall installation work featuring a giant moon jar on one side and Hangeul characters on the other is installed there, right under Paik’s 1995 work “TV Chandelier” which was installed there in the late 1990s.

“I have a really deep connection with Paik Nam-june,” said Kang. Paik was very fond of Kang, enough to make a request to the Whitney Museum to give the better space for Kang for their two-person show. The day of Kang’s show’s opening on Wednesday was also Paik’s 79th birthday.

It seems that it would not be an overstatement to say that Kang is one of Korea’s representative artists today who are as established internationally as Paik was. When asked if he agreed, however, Kang quickly shook his head.

“Not at all. I am embarrassed when people say that. There are so many big figures in New York whom I cannot dare to compare myself with. No, not at all,” he said.

The exhibition runs through Sept. 28 at POSCO art museum in Daechi-dong, southern Seoul. For more information, call (02)3457-1665 or visit www.poscoartmuseum.org.