The eurozone will provide Greece fresh loans, take steps to reduce the country's 350-billion-euro debt and open the door for the private sector to contribute to a second bailout, according to a draft agreement. 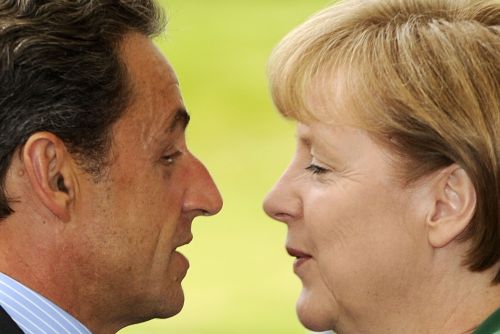 German Chancellor Angela Merkel greets French President Nicolas Sarkozy on Wednesday in the courtyard of the Chancellory in Berlin, prior to talks the day before a pivotal summit of heads of state and government in Brussels aimed at sealing a second Greek bailout. (AFP-Yonhap News)

The 17-nation bloc will also offer Greece and two other bailed out nations, Portugal and Ireland, loans on improved terms, with lower interest rates and lengthier maturities, according to the draft.

Diplomats told AFP the eurozone and IMF were considering providing rescue aid worth 71 billion euros ($101 billion), not including a possible contribution from the private finance sector. The draft text did not specify a sum.

News of the draft gave the euro a strong bounce just hours after it sank on a warning that Greece could face some form of default under the new rescue package.

"We cannot exclude any possibility and everything should be done to prevent (a default)," Luxembourg Prime Minister Jean-Claude Juncker, head of the Eurogroup of finance ministers, said on arrival for the Brussels summit.

Juncker insisted that the single currency was "not in danger" following weeks of market turbulence driven by fears the crisis was dragging down Italy and Spain, and could spread across the world.

After unsettling markets earlier this week by downplaying expectations of a "spectacular" deal, Merkel was upbeat that an accord come through to "attack the root of the problems" in order to improve Greek competitiveness and the "sustainability" of its debt.

The leaders dropped the idea of a bank tax to help fund a second Greek bailout but they kept German demands for private sector involvement, even at the risk of triggering a default, diplomats said.

Germany, backed by the Netherlands and Finland, had been at odds with the European Central Bank and Paris over Merkel's demands for private investors to shoulder some of the bill for the new Greek rescue, one year after a first 110-billion-euro ($156-billion) bailout.

There are concerns that any change to the terms of outstanding Greek sovereign bonds could prompt rating agencies to declare Athens in default, with potentially dramatic domino consequences.

ECB chief Jean-Claude Trichet, who has warned that a default would force the ECB to refuse to accept Greek bonds as collateral, took part in the talks with Merkel and Sarkozy in Berlin late Wednesday.

Among the options on the table, the eurozone's crisis fund could buy Greek government bonds directly from investors in order to reduce its debt load.

Private bondholders would be given three choices -- a partial buyback of Greek debt, exchanging Greek bonds in hand for new ones with longer maturities, or a "rollover" in which creditors reinvest holdings as they come due.

"We must help Greeks to meet their obligations, this means extending the deadlines so that they can pay," said Austrian Chancellor Werner Faymann.

The European Union and the IMF provided last year a 110-billion-euro bailout to Greece that has proved insufficient. Since then, Ireland and Portugal received their own multi-billion-euro rescues.

To ease the burden on Greece, Portugal and Ireland, loans to the three countries would be extended from 7.5 years to 15 years while the rates would be lowered from 4.5 percent to 3.5 percent, the draft said.

Highlighting the global concerns, US President Barack Obama, who faces his own debt impasse with the US Congress, spoke with Merkel by telephone on Tuesday to discuss Europe's crisis.

"Today's summit could provide the last chance for eurozone policymakers to get a grip on the region's debt crisis," said research firm Capital Economics.

"Anything other than a very decisive response could see the situation become irretrievable."