A Marilyn Monroe expert, however, says the actress in the film is someone else, considerably heavier and less feminine than the legendary film star. 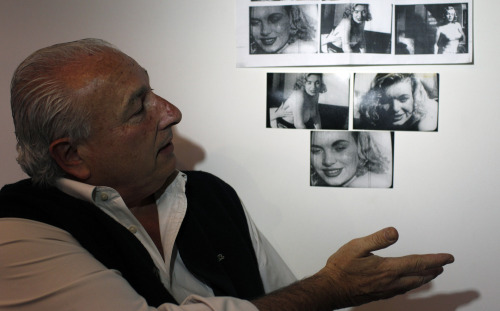 He said it’s an exact copy of a 16-mm film discovered more than a decade ago. Barsa brokered a sale of that film to a European magazine in 1997, which he said in turn sold some 600,000 copies before a collector bought the original 16-mm reel for $1.2 million. Copies of that version are still circulating on the Internet.

“People with romantic notions have denied that it’s Marilyn Monroe, and have invented stories” to raise doubts about the film, Barsa said in his Buenos Aires office, which is lined with pictures from his days as a concert promoter. “This film shows the real Marilyn Monroe ― it was only later that the studios discovered her and transformed her.”

The face of the woman in the film looks considerably different from the Monroe who emerged later as a star, but more similar to the Monroe seen in one of her first movies, 1949’s “Love Happy,” which shows the actress before she lost weight, added a beauty spot on her left cheek and became one of Hollywood’s most enduring stars.

Barsa said he has no idea how the two original copies ended up in the hands of the people who sought his help selling them, and he refused to identify any of the principals involved. He said that in the 1940s, sex films were often made using side-by-side 16-mm and 8-mm cameras, since audiences used both formats.

The collector said that Mark Roesler of Indianapolis-based CMG Worldwide, which has managed the image and estate of Monroe, threatened to sue after the earlier version surfaced in 1997. Barsa said nothing ever came of it after the owners offered to sell the film to CMG.

Barsa says he plans to auction the film himself Aug. 7 at a memorabilia collectors fair that he has organized in Buenos Aires, and is hoping for publicity similar to the scandal he generated when he screened the 16-mm version at a similar fair in Madrid in 1997. News coverage of his auction is already creating another buzz on the Internet.

His part of the deal is a 10 percent sales commission, he said.

A variety of sexually explicit films and pictures have been attributed to Monroe over the years, fostering a long and unresolved debate.

“In the Marilyn community, people have debated this for years and years and for the most part it’s widely believed that this is not her,” Fortner said.

Still, even Fortner said Monroe’s image changed considerably as she became a star ― that she had some plastic surgery, learned how to hold her face differently in modeling school and adopted a mole on her left cheek. “I actually think it moved from time to time,” Fortner said.