The 77-year-old has starred in 302 Korean movies since 1959 and has won a number of film awards, including two Best Male Actor Awards at the Daejong Film Awards. 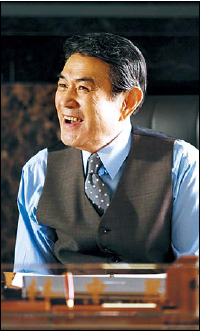 Namgung Won in a scene from SBS drama “Scent of a Woman” (SBS)
His latest role will be the first in 10 years since he starred in the 2001 movie “Saulabi.” The actor, whose real name is Hong Kyung-il, is the father of Rep. Jungwook Hong of the Grand National Party.

“Scent of a Woman,” scheduled to air starting Saturday, revolves around a woman who chooses to make a “bucket list” instead of receiving chemotherapy after being told by her doctor that she has six months to live.

Namgung plays the role of a tycoon who takes revenge against a man who refused to marry his daughter. Actress Kim Sun-a will play the lead role.