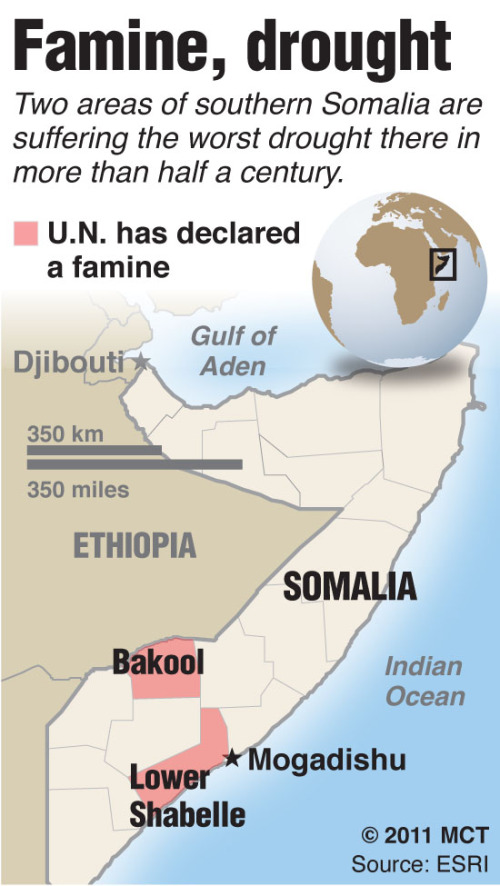 U.N. declares crisis in parts of the country, tens of thousands feared dead

NAIROBI (AP) ― Tens of thousands of Somalis are feared dead in the world’s worst famine in a generation, the U.N. said Wednesday, and the U.S. said it will allow emergency funds to be spent in areas controlled by al-Qaida-linked militants as long as the fighters do not interfere with aid distributions.

Exhausted, rail-thin women are stumbling into refugee camps in Kenya and Ethiopia with dead babies and bleeding feet, having left weaker family members behind along the way.

“Somalia is facing its worst food security crisis in the last 20 years,” said Mark Bowden, the U.N.’s top official in charge of humanitarian aid in Somalia.

“This desperate situation requires urgent action to save lives ... it’s likely that conditions will deteriorate further in six months.” 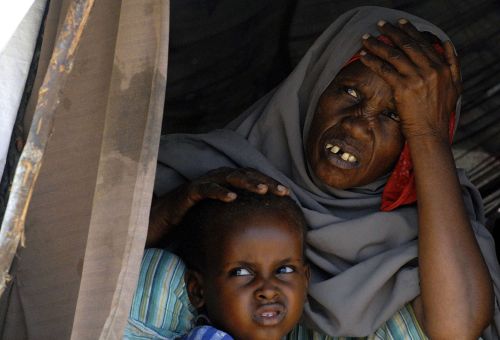 Newly arrived Internally Displaced People wait for food aid at a camp Wednesday. (AFP-Yonhap News)
The crisis is the worst since 1991-92, when hundreds of thousands of Somalis starved to death, Bowden said. That famine prompted intervention by an international peacekeeping force, but it eventually pulled out after two American Black Hawk helicopters were shot down in 1993.

Since then, Western nations have mainly sought to contain the threat of terrorism from Somalia ― an anarchic nation where the weak government battles Islamic militants on land and pirates hijack ships for millions of dollars at sea.

Oxfam said $1 billion is needed for famine relief. On Wednesday, the U.S. announced an additional $28 million in emergency funding on top of the $431 million in assistance already given this year.

Most importantly, as long as the Islamists don’t interfere with aid distributions, those new U.S. funds aren’t restricted under rules implemented in 2009 that are designed to keep food and money from being stolen by the insurgency.

“If (the insurgents) are willing to allow access we are willing to stand fully with the humanitarian actors,” said Dr. Raj Shah, head of the U.S. Agency for International Development.

Aid groups have repeatedly called for the restrictions to be lifted and say the rules severely limited their operations in the past two years. U.S. humanitarian contributions in Somalia fell from $237 million in 2008 to $29 million last year.

“We’ve seen a very large shortfall over the past few years given the political restrictions attached to humanitarian funding,” said Tanja Schumer of the Somalia NGO Consortium, which represents 78 aid agencies working on Somalia. “To get American money we have to vouch for all our contractors and all our local partners and that is tricky.”

Susan Rice, the U.S. ambassador to the United Nations, blamed al-Shabab for exacerbating the crisis.

“The reason the aid hasn’t gone in sufficient quantities into south and central Somalia is because al-Shabab has prevented those capable of delivering large quantities of aid from having access ― and when they have had access they’ve taxed them, harassed them, killed them, kidnapped them,” Rice told reporters at U.N. headquarters in New York.

Somalia is the most dangerous country in the world to work in, according to the U.N.’s World Food Program, which has lost 14 relief workers in the past few years. Kidnappings, killings and attacks on aid convoys occur frequently. Two years ago WFP pulled out of Islamist-controlled southern Somalia after the rebels demanded cash payments and other concessions.

U.S. military operations against terrorism suspects also have disrupted humanitarian operations, said Bowden. Insurgents vowed to target foreign aid workers after a U.S. missile strike killed the head of the Islamist al-Shabab militia and 24 other people in 2008. Aden Hashi Ayro was reputedly al-Qaida’s commander in Somalia and linked to a string of attacks on foreign aid workers and journalists.

But WFP head Josette Sheeran said the agency is willing to return to southern Somalia if the insurgents guarantee safe passage and free access to aid. Two regions of Somalia ― Bakool and Lower Shabelle ― are suffering from famine and eight more are at risk.

“We are absolutely fully committed to going where the hungry are,” she said.

The Horn of Africa is suffering a devastating drought compounded by war, neglect, poor land policies and spiraling prices. Some areas in the region have not had such a low rainfall in 60 years, aid group Oxfam said. Kenya, Ethiopia and Djibouti have all been badly affected, and Eritrea is also believed to be suffering, although its repressive government does not release figures.

Yet only parts of Somalia are technically suffering from famine, defined as when two adults or four children per 10,000 people die of hunger each day and a third of children are acutely malnourished.

In some areas of Somalia, six people are dying a day and more than half of children are acutely malnourished, Bowden said. Prices of staple foods have increased 270 percent over the last year, compounding the misery.