Korea’s class action suit against Apple Inc. is taking shape as a team of lawyers from the Miraelaw law firm are gearing up to file thousands of suits together next month.

So far, more than 23,000 people have taken part in the class action spearheaded by the law firm’s 36-year-old lawyer Kim Hyeong-seok.

Kim was the first in the country to win a ruling against Apple. On June 15, Changwon District Court ordered the global giant to pay him 1 million won ($925) for collecting his location log without consent. Not making any remarks about the case, Apple Korea sent the sum to Kim’s account on June 27. 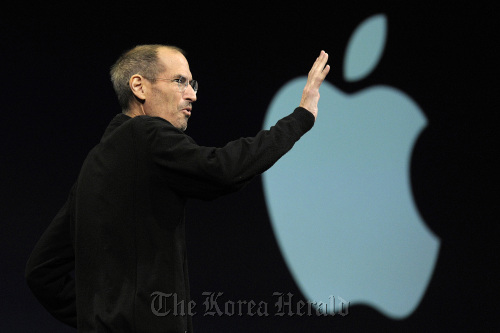 Steve Jobs, Apple Inc. CEO, waves to the audience before unveiling the iCloud storage system at the Apple Worldwide Developers Conference 2011 in San Francisco in June. (Bloomberg)
Apple is accused of gathering location data and storing it for up to a year, even when the location software was switched off.

Apple Inc., however, has denied collecting customers’ location-based information, claiming that the data was not location data of iPhone owners but a subset of the crowd-sourced wireless Internet hotspots and cell tower database that is downloaded into the iPhone.

“What Apple missed here was that there are about 3 million iPhone owners in Korea who have a lot to say about how it deals with its clients here but have been keeping their silence for a while,” said an industry source who wished to remain anonymous.

The crowd ― angered by Apple’s after-sales service policy and its major delay in product delivery ― formed when Kim made public last month that he would defend those who are up for the collective suit against the maker of innovative gadgets such as the iPhone, iPad and iPod.

To take part in the suit, people must first go through the identification process on the website (www.sueapple.co.kr) and then each make financial payment of 16,900 won, which includes the suit filing and lawyer costs.

When logging onto the website, it reads, “Finally. The real action against Apple. Now available here.” Each participant is projected to receive 1 million won if it rules in favor of the group.

“We will first accept the complaints of the first group of people who want to participate in the class-action suit until July 31 and submit it either to the Seoul Central District Court or the Changwon District Court,” according to Kim.

Bracing for the lawsuit, which the law firm expects to take up to one year, it plans to recruit more members by placing two to three more lawyers on the team, in addition to Kim and Lee Jae-choul of law firm Miraelaw.

“The collective lawsuit is designed to sound an alarm at Apple which is continuing to show arrogance over the privacy breach of local customers and its violation of Korean privacy protection law,” Kim said in a press conference earlier on Monday.

Apart from the class action, Apple faces another battle as the Korea Communications Commission plans to announce the details surrounding its probe on Apple early next month.

A group of officials from the state media regulator visited the headquarters of the U.S.-based Apple earlier this month after a months-long debate over the issue.

KCC officials were reportedly unable to find evidence that Apple saved the personal location information on purpose or that they had actually used the collected data. However, they saw that the information was gathered without getting users’ permission.

This means Apple is most likely to receive punishment in the form of paying a penalty or given a warning for violating the law following the KCC commissioners’ ruling on the case.

“Apple should reconsider its ‘mum’ policy for it has proven that it does not to go well with the Korean culture. (Apple) should rather speak out about where it stands on customer privacy protection and customer service than maintaining its current posture,” said another industry source.