Both countries said they were satisfied with the ruling by the International Court of Justice, meant to end clashes that have claimed about 20 lives in the last three years and have displaced tens of thousands of people from the area around the Preah Vihear temple. 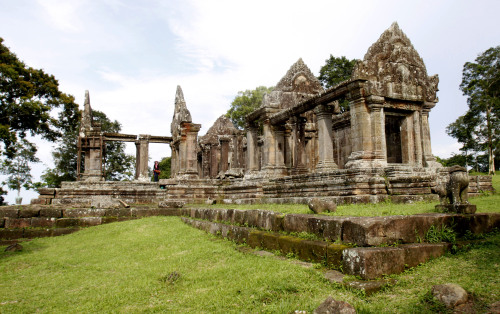 Cambodia’s 11th century Hindu Preah Vihear temple, near the disputed border of Cambodia-Thailand, in Preah Vihear province (AP-Yonhap News)
But Thailand’s Prime Minister Abhisit Vejjajiva said that Thai soldiers will not pull out from the disputed area until the military of both countries agree on the mutual withdrawal.

“So there has to be some kind of mechanism to verify, to do it in an orderly manner. And therefore it depends on the two sides to come together and talk,” he said, suggesting that an existing joint border committee would be the appropriate place to plan a coordinated pullback.

In The Hague, Cambodian Foreign Minister Hor Namhong said the establishment of a demilitarized zone would mean “a permanent cease-fire. It will be tantamount to a cessation of aggression” by Thailand.

In brief remarks to reporters outside the courtroom, he made no reference to the demand for Cambodian troops to abandon the temple grounds.

The “provisional demilitarized zone” mapped out by the world court judges calls for Thai troops to move off a ridge line north of the temple and for Cambodian forces to leave the temple complex and move across a deep valley south of the shrine. It also called on the two nations to allow officers from the Association of Southeast Asian Nations into the area to observe the cease-fire, which was called for by the U.N. Security Council last February.

After much wrangling, Thailand and Cambodia in May agreed on terms under which Indonesian observers would be sent to the border area, but the plan has not been carried out.

The court also ordered that unhindered supplies be provided to civilians at the temple, which would have to come via a road that Thailand claims runs through its territory.

The decision came after Cambodia appealed to the U.N.’s highest judicial body to intercede in the conflict and order Thai troops with withdraw.

Thailand disputed the court’s jurisdiction and asked the judges to dismiss the case.

By a vote of 11-5, the court went beyond Cambodia’s request and imposed restrictions on both armies and police forces.

It said it decided to intercede to avoid the risk of more bloodshed and further damage to the ancient Hindu shrine.

“The situation remains unstable and could deteriorate,” it said, despite an oral cease-fire after the latest fighting in April.

It ordered both sides to immediately withdraw armed forces, and “refrain not only from any military presence within the provisional demilitarized zone, but also from any armed activity directed at the said zone.”