A total of 412,000 kiloliters of the Korean rice wine were shipped here in 2010, up 58.1 percent from the previous year, according to the National Tax Service. 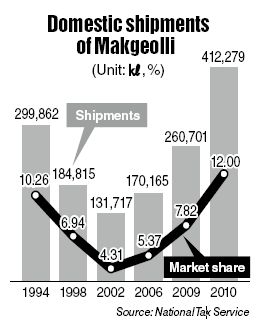 In the local alcohol beverage market still dominated by soju, a Korean distilled beverage made from rice and other starches, and beer, the makgeolli share increased to the highest at 12 percent in 16 years.

Exports to Japan, which made up 81 percent of the total, more than doubled over the year.

It was the first time since 2005 that the amount of makgeolli exports ($15.59 million) exceeded that of Japanese sake imports ($13.69 million), the NTS added.

Of the growing popularity of makgeolli, the agency said that the taste and quality have improved as many manufacturers have started to use domestically grown rice.

“Coupled with the recent health-conscious trend and the Korean Wave in Japan, the consumption and export of makgeolli will continue to grow for some time,” said a NTS official.

During the same period, shipments of soju showed only a 0.07 percent increase, while beer saw a 2.3 percent decrease.

Last year, the local alcohol beverage market was estimated to be worth about 7.89 trillion won ($7.43 billion), the agency said.

Despite its increase of 12 percent of market share, makgeolli’s low tax rate of 5 percent contributed only 0.7 percent of the total liquor tax revenue.

The data also found that a Korean adult aged 19 or older on average consumed 66.6 bottles of soju, 100.8 bottles of beer and 14.2 bottles of makgeolli last year.