The world’s largest summit in the water-related industry fosters global collaboration on issues ranging from water supplies and sanitation to access rights.

Korea announced its bid last year and is competing against Scotland’s Glasgow. 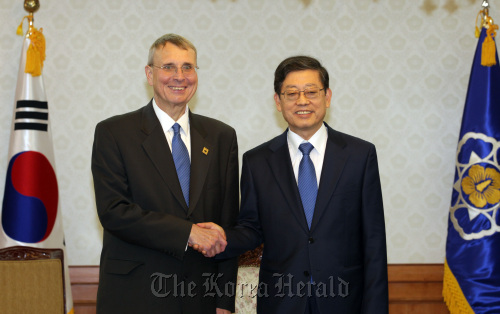 Prime Minister Kim Hwang-sik (right) poses with World Water Council assessment committee chief Ken Reid at the government complex in central Seoul on Monday. (Yonhap News)
During the visit, the delegates will review the government’s plans and inspect the proposed venue, transportation and accommodations as well as water systems in Daegu and North Gyeongsang Province in the country’s southeast, the Ministry of Land, Transport and Maritime Affairs said.

The winner will be finalized in November by 36 members of the WWC, the forum’s organizer.

The ministry estimates that the triennial event would generate at least 1,900 jobs and direct economic effects worth 200 billion won.

The last event held in 2009 in Istanbul, Turkey courted around 33,000 participants from governments, businesses, academia and international organizations in 15 countries. France’s Marseille is the host for the 2012 summit.

“The forum would provide local companies with a chance to venture into the rapidly growing water market, which is expected to reach 1,000 trillion won by 2025,” the ministry said.