Sales of light trucks, a category that includes pickups, minivans and SUVs, grew twice as fast as total auto deliveries in Canada in the first half, helped by growth in construction jobs. Chrysler led deliveries last month for the first time since January, winning by a wide enough margin to snatch the crown for year-to-date sales. 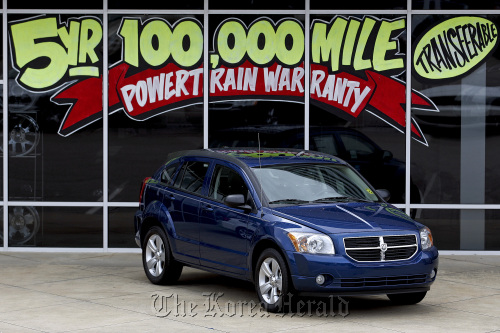 A Chrysler Dodge Journey crossover sits on display at Chris Leith Dodge dealership in Wake Forest, North Carolina. (Bloomberg)
Purchases of Chrysler’s Dodge Journey model, which guzzles less gasoline than a traditional truck-based SUV, increased more than Ford’s Escape or General Motors Co. ‘s Chevrolet Equinox. Those gains put Chrysler within less than 4,000 total deliveries of becoming the overall No. 2 automaker in Canada, where a growing economy is expected to lead to a 2.6 percent increase in sales this year industrywide, according to Scotia Capital Inc.

“People who are getting jobs are opting for practical vehicles such as a crossover” to get better mileage than a traditional SUV, said Carlos Gomes, an economist at Scotia Capital. “You have the construction sector holding up very well, and that is positive for the pickup segment.”

In total vehicle sales, Chrysler gained 1.6 percentage points of market share to 15 percent in the first half of 2011 from a year earlier, according to DesRosiers Automotive Consultants Inc. GM lost 0.2 points to 15.5 percent, and Ford led with 17.4 percent of the Canadian market. Ford eclipsed GM as Canada’s top-seller last year for the first time in decades.

A 30 percent rise in oil prices in the past year may spur demand in Canada’s oil-producing regions. The unemployment rate is 5.6 percent in the western province of Alberta, according to its website.

“When the oil price is going up, everybody knows they have a job,” said Dan Rewucki, owner of Tower Chrysler in Calgary.

High fuel prices led many consumers to gravitate toward compact cars and car-based SUVs, commonly called crossovers, for their fuel efficiency, Gomes said. Gasoline sold in Canada at an average price of C$1.22 a liter ($4.82 per gallon) on July 8.

Light-truck sales in the first half grew more than twice as fast as Canada’s industry average of 2.7 percent over the same period last year. The category has made up about 85 percent of Chrysler’s sales since the beginning of 2010.

As SUVs’ fuel efficiency improves, buyers are “bleeding from the midsize car segments over to compact utilities or minivans,” said Ryan Robinson, director of automotive practice for J.D. Power and Associates Canada in Toronto. “If you’re going to offer similar kinds of fuel economy with greater space, that’s obviously going to attract people.”

There were only a few Journeys on the lot of Steve Dennis’ Chrysler dealership in Winnipeg, Manitoba, on July 7.

“I probably did undershoot the market,” he said in a telephone interview. “I won’t make the mistake of running out again.”

Dodge Grand Caravan minivans, Ram pickups and Jeep Wrangler SUVs, as well as the Journey, reported best-ever June sales in Canada. “This is the best retail June sales month since 2005,” Dave Buckingham, Chrysler Canada’s chief operating officer, said in a July 4 statement. Its 23.2 percent of the light-truck market is better than any yearly total since 2002, Jordan Wasylyk, a spokesman, said in an e-mail.

Light-trucks surpassed passenger cars in 2010 sales for the first time in more than a decade and composed 55 percent of the market in the first half of this year.

Passenger cars outsold light trucks in the U.S. in the first half of 2011 with 51 percent of the world’s second-largest automobile market this year, unchanged from a year earlier.

Crossovers were the largest segment of the U.S. auto market in the first half of 2011, accounting for more than one-sixth of sales, according to Autodata Corp. Pickup sales grew slower than GM expected, causing its inventory to swell to 122 days’ worth, Bloomberg News reported July 5.

“There are a lot of sectors and industries here that rely on U.S. demand,” he said.