The stock has risen 506 percent to 1,720 pence in the past 12 months, making it best performer in the apparel retailers segment, according to Bloomberg data. Among all retailers, it’s behind only PT Mitra Adiperkasa, an Indonesian company that runs Starbucks Corp. coffee shops and Sogo department stores in the country, which has risen 637 percent over the period. 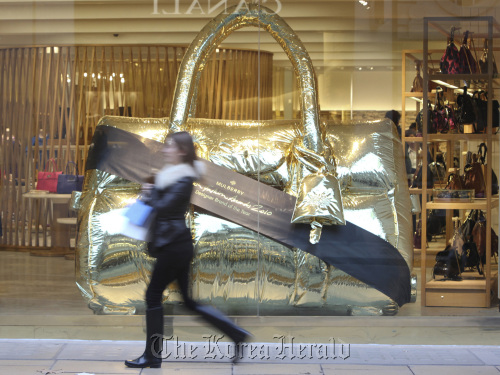 A shopper passes a giant gold handbag on display in the Mulberry store in London. (Bloomberg)
Investors are betting Mulberry, whose handbags include the Alexa, named after British model and television hostess Alexa Chung, and its Bayswater bag, available in a “bright-cabbage sparkle tweed” at 775 pounds ($1,250), will join the likes of Burberry Group Plc as an iconic luxury brand.

“Growth is very hard to come by, particularly in western Europe, but there are still some companies growing incredibly fast,” said Harry Nimmo, manager of the 1 billion-pound U.K. Smaller Companies Fund at Standard Life Investments.

Nimmo’s funds are the third-largest holder of Mulberry stock and own 7.2 percent of Asos Plc, a U.K. Internet clothing retailer. Asos is western Europe’s second-biggest gainer among clothing retailers above a market value of $10 million over the past year, Bloomberg data show.

Extending the brand name is a “classic strategy,” which Mulberry has considered, said Chairman and Chief Executive Officer Godfrey Davis in a telephone interview last week. The management wants to wait until Mulberry has sufficient presence worldwide, and it’s “approaching that critical mass.” he said.

The company is keen to keep its English identity and is adding 50 staff to its factory at Chilcompton, England, to keep the number of bags made in Britain at 30 percent, Davis said.