[ The Korea Herald – Send E-mail ]
Matching German wine with Korean food
By John.Power
Published : Jul 17, 2011 - 18:24
Updated : Jul 17, 2011 - 18:24
Soju may be the typical accompaniment to “samgyeopsal,” but German Ambassador to Korea Hans-Ulrich Seidt is on a mission to promote a less obvious pairing with the Korean favorite ― Riesling white wine.

“I like Korean food very much. And I realized that German white wine goes very, very well with Korean food, in particular Riesling from the different areas we have in Germany,” Seidt said Wednesday to a get-together to promote the pairing of the meat and grape. 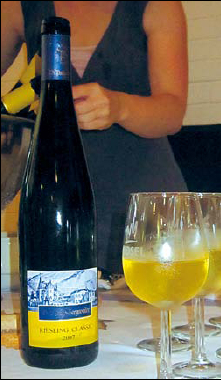 A 2007 Dr. Pauly-Bergweiler Riesling(John Power/The Korea Herald)
Riesling is Germany’s most popular grape variety, originating from the Rhine region of the country. Covering a wide range of styles, it is highly versatile, going with many different foods.

“The general idea is to have fun, to drink a glass of white wine and enjoy Korean food,” the German ambassador told The Korea Herald at his residence in Sungbuk-dong, Seoul, as guests lined up with half-full glasses to sample the pork belly being barbequed on the spot.

Seidt said the inspiration for the event came from a dinner after a hard day’s exercise.

“We were hiking in the summer, coming down the mountain and we had either bulgogi or samgyeopsal. So we had samgyeopsal and I thought German white wine would go very well with it, and I thought this we could share with our Korean friends.”

The German ambassador said the passing of the EU-Korea FTA on July 1 is set to make German wine even more affordable and attractive to Korean consumers.

“Wine used to be a very expensive commodity but, nowadays, with the FTA and very low tariffs for sea transport, wine is becoming very competitive. And I would say it has one advantage: It is healthier than those very strong alcohols. It is not dangerous for your health,” he said.

As for his favorite, it’s a 2007 Dr. Pauly-Bergweiler Riesling Classic.

“I like this wine very much. This wine has a lot of minerals. It is a medical doctor who is running the vineyard.”

But Seidt said that gastronomic exchanges between the two countries were far from one-sided. Korean food, he said, is growing ever more popular in Germany.

And just why does he think Riesling goes so well with samgyeopsal?