A hard wind whooshed and rattled a window in the hospital cell where Robert Stroud, “The Birdman of Alcatraz,” spent 11 of his 17 years when this was the dankest, hardest federal prison in the U.S.

Yet, most of the more than one million tourists who visit the famous former prison annually never get to experience Alcatraz Island at night or see its spooky, decrepit hospital ― experiences unique to the night tour. At dusk the island prison that housed some of the nation’s most notorious criminals ―including Al Capone and the recently rearrested James “Whitey” Bulger, who was on The Rock for bank robbery from 1959-1963 ― is often enshrouded by fog, and the lamps on the grounds emit a ghostly glow. 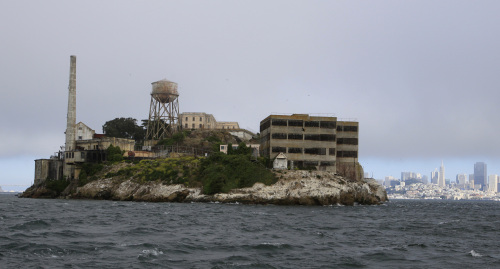 Visitors get a rare view from a tour boat of the west side of Alcatraz Island before taking the night tour of the former prison in San Francisco on July 7. (AP-Yonhap News)
The difference from the daytime tour is apparent from the start. The ferry from San Francisco motors slowly around the west side of the isle, passing decrepit buildings surrounded by Alcatraz’s new residents: black Brandt’s cormorants, Western gulls and the other birds that have made their home there since U.S. Attorney General Robert Kennedy shuttered the prison in 1963.

“This is a little eerie,” said Gerard Lang, 28, who was visiting from Covington, Kentucky “You kind of feel like you’re heading to prison yourself.”

After leaving the boat visitors begin a winding ascent past the prison’s official sign, where a faded “Indians Welcome” written in red paint is still visible, remnants of the Native American occupation of the island in from 1969 to 1971. The island became a national park in 1972.

“You’re following in the footsteps of every federal prisoner who ever came here,” said Eric Knackmuhs, a Golden Gate National Parks Conservancy guide.

Passing the guano- and rust-covered buildings that once housed the families of prison guards, the park’s employees tell of a failed Friday the 13th, 1939, escape attempt ― one of many escape attempts recited in gripping detail that are not included on the daytime tour.

Once inside the prison, the audio tour features stories from ex-inmates and former prison guards in their own voices.

The tour leads visitors through D Block, or solitary confinement, where you can stand inside a dark cell and listen to the voices of inmates who spent time there. Close your eyes and you can sense the isolation, the desperation.

If you’re lucky and find a guide who isn’t too busy, you can also ask to take a quick detour into “The Dungeon,” another of the usually off-limits areas of the prison that can be accessed at night.

The dungeon is left over from when Alcatraz was a military prison, and has a series of small alcoves where Civil War and World War I-era prisoners were held, said Jim Bradon, a guide. Shining a flashlight on the wall of one dark alcove, the prison inmate numbers of former dungeon denizens can be seen carved into the bricks.

As the sun sets and the lights inside the penitentiary dim, the employees open up the hospital at 8 p.m. Visitors walk through the dark rooms past old metal operating tables, the former X-ray room with windows painted black and the psych ward.

The hospital visit is unique to the night tour, and it is a significant addition to Alcatraz’s story.

“You ever see ghosts here?” a tourist asked an employee in the hospital’s hallway, shadows dancing on the walls as tourists passed before lanterns.

After a brief pause, she said no.

On the ride back to shore, San Francisco’s skyline glowed through the evening fog and many remarked on the unique evening spent on Alcatraz.

“At night it was kind of eerie with the fog and the lights. That was really cool,” said Steven Winslade, 26, from London, England.

Alcatraz: http://www.nps.gov/alcatraz. Alcatraz can only be reached by ferry and there is a charge for ferry service to and from the island, which includes the cellhouse audio tour and departs from Pier 33 at Fisherman’s Wharf in San Francisco. Tickets and schedule at http://www.alcatrazcruises.com. Tickets are made available about 60 days in advance; reservations recommended as some tours do sell out, with the night tours among the most popular. Tours take 2 1/2 hours round-trip. Daytime tours are $26 ($16 for kids 5-11, free for children under 4, $24.50 for seniors 62 and over), with departures 9:10 a.m.-3:55 p.m. daily. Nighttime tours are $33 ($19.50 for kids 5-11, $30.50 for seniors), with departures Thursday-Monday at 6:10 p.m. and 6:45 p.m.