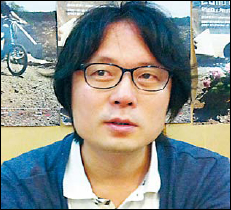 Kim Seong-uk, program director ofthe Korean Associat ion of Cinematheques, speaks during aninterview with The Korea Herald onTuesday. (Claire Lee/The Korea Herald)
Kim has been in charge of organizing both screenings and education programs for anyone who likes movies or learning about films, ever since the venue’s opening in 2002.

“To put it simply, Cinematheque is like a film library,” Kim said during an interview with The Korea Herald.

“Yet it is also a community where people who like movies can independently share their cinematic experience. Unlike public museums and libraries that are launched and managed by the government, Cinematheque is created by and owned by ordinary people who simply like watching and talking about movies.”

Kim last month received a medal from the Italian government for his work at Seoul Art Cinema. The program director has been introducing a variety of Italian films ― both new and old ― along with other films at the venue throughout the years.

“It’s meaningful for us that a foreign government recognized the value of Cinematheque and what it does for the public,” said Kim.

“I’ve liked Italian films ever since I was a child. I think they have a great depiction of reality and love for human kind.”

Yet Kim’s experience with the Korean government has been something different. Since last year Seoul Art Cinema has been working on a project to build a new, spacious venue where screening, exhibitions and archive rooms can all be accommodated in one place. Yet as the government last year cut its funding for the organization by 50 percent, Seoul Art Cinema has been struggling financially.

“I’ve met government officials who would say, ‘Why do people have to watch old movies in theaters?,’ or ‘Do we really need to watch dated movies?’” said Kim.

“Without knowing about the past, it is impossible to learn about what’s happening now. It’s the same with the films. The current venue is often too loud ― as other floors of the building are occupied with musical instrument shops ― to screen old films or silent films.”

Kim said he does not want people to think Cinematheque only screens art-house films.

“Our main purpose is not to screen art films that have been praised,” he said. “It is to given an opportunity for the visitors to find art in any movies that have been either forgotten or not properly reviewed.”

Visiting Cinematheque is almost equivalent to an investment, Kim said.

“It enables you to watch the movies you used to like back in the days with your children at the theater.”