Another marine was found dead at his unit in Pohang, North Gyeongsang Province, in an apparent suicide on Sunday night, further escalating public concerns over purportedly prevalent abuses in the military.

The death of the 19-year-old lance corporal, identified only by his surname Jeong, came after a marine committed suicide and four others were killed in a shooting rampage about a week ago.

His body was found at around 10:22 p.m. in a bathhouse of the Marine First Division. He apparently hanged himself there, officials said.

He left a one-page suicide note in which he apologized to his parents and expressed frustration over his military life, they said. An investigation team was immediately set up to find out what motivated him to kill himself.

His bereaved family claimed that in addition to beatings and other forms of mistreatment, the practice of excluding him from a military renovation work could have contributed to his suicide. 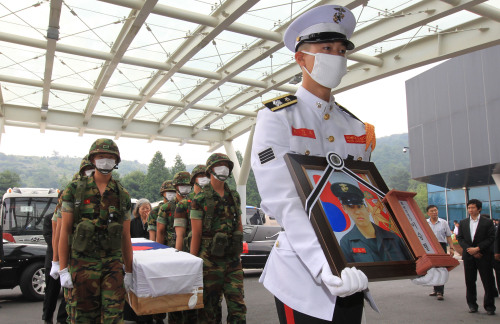 (Yonhap News)
Seniors are usually excluded from the work, but in some cases low-ranking maladapted soldiers are left out of the work and harassed.

“I heard that (his seniors) left him out of many tasks, harassing him and rebuking him for being clumsy, and that he was under a lot of stress because of that,” his teary-eyed father told reporters.

“At times, my son told his mother over the phone that he wanted to die. I had no idea that he would pass away like this.”

Military investigators are not ruling out the possibility of him opting to take his own life due to mental or physical abuse from his seniors, officials said. He joined the Marine Corps last November and was assigned to the unit early this year.

“Based on the suicide note, we are now trying to verify the exact cause of his death. As soon as we conclude our inquiry, we will reveal the results to the public,” a military official said, requesting anonymity.

Some critics lashed out at the Marine leaders as the apparent suicide took place several days after they expressed strong will to strengthen mental education and pay more attention to maladapted soldiers.

The military investigators requested arrest warrants for several soldiers who were allegedly involved in physical abuses at the Marine Second Division where the shooting rampage occurred last Monday.

The 19-year-old corporal Kim, who opened fire at his barrack on Ganghwa Island off the west coast, killing four soldiers, indicated that bullying led to the shooting.

Private First Class Jeong, who was arrested on charges of complicity in the rampage, also claimed that he was seriously harassed by his seniors. He stated that his seniors set fire to his bible while saying a sergeant is of the same status as a god, and that they sprayed flammable liquid into his pants.

The Marine Corps Command has decided to dismiss regimental commander Col. Min and battalion commander Lieut. Col. Han from their current posts to hold them responsible for the shooting incident.

Meanwhile, the bulletin board on the homepage of the Marine Corps was swamped with postings berating the Marines for human rights abuse cases that have recently been revealed following the shooting rampage. Some called for the resignation of Marine Corps Commander Yoo Nak-joon.

“My son is at around the age he has to go to the military. He used to talk about joining the Marine Corps, but following the shooting rampage, he doesn’t even want to make a mention about it,” said Kwon Soon-woo in his posting.

“It is pathetic that the marines do (abusive practices) that even the Army did not do in 1977 when I was serving in the military.”

Jeong Jong-gil, who sent his son to the Marine Corps just several days ago, also expressed his deep frustration over abuse cases.

“They are saying that such unbelievable, filthy and vile practices are part of the Marine tradition. This has left me speechless,” he said in his posting.

Looking at the bulletin board deluged with criticisms about the Marine Corps, Lee Young-shin whose son is now a marine private first class called for caution and restraint in expressing opinions on the board.

“After hearing the (shooting) incident, I couldn’t get a wink of sleep at night as I feel very apprehensive about it,” she said in her posting. “With your thoughtless comments, please do not undermine the honor of marine soldiers and hurt parents’ feelings.”