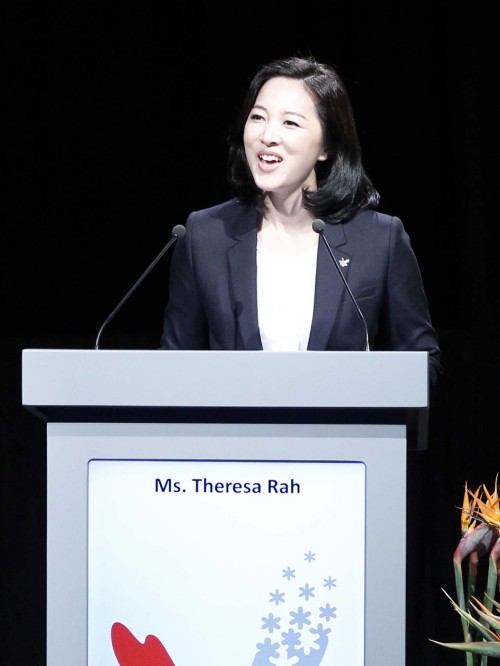 
Theresa Rah, communications director of the PyeongChang 2018 Winter Games Bid Committee, has stepped into the limelight as her eloquent and touching presentation is credited with helping the city win the bid last week.

As the world watched, the former journalist carried out the presentation of Korea’s decade-long effort to host the 2018 Winter Games and why PyeongChang should be the host city in a calm but confident manner.

Now she is being called the heroine of Durban as her presentation garners high praise for contributing to the day’s victory.

Her fluent presentation both in English and French in such a persuasive manner captured IOC members’ attention, and PyeongChang’s bid prevailed with an overwhelming portion of the vote. She said her heart felt as if it was about to explode when PyeongChang was announced by the IOC president Jacques Rogge and her year-long effort to promote it seemed to be paying off. Her tears were aired live when the IOC president called out the name of the city.

Until then Rah hadn’t been known to the Korean public, but she is quite famous in the international sports scene. She was appointed spokesperson of the PyeongChang 2018 Winter Games Bid Committee last April and has been at the forefront of promoting the bid. She also participated in promoting the 2002 football World Cup and the 2012 Yeosu Expo.

She developed her ability to present at a large international event when she was an anchor of the Korean English news channel Arirang TV for four years starting in 1996.

Rah spent about 12 years overseas with her diplomat father in Canada, the United Kingdom, Denmark and Malaysia and acquired fluency in English and French. She then graduated from the French literature department of Ewha Womans University.

A video of her presentation spread quickly via social networking sites such as Twitter.

One Twitter user said of her presentation: “Wise choice to have Theresa Rah speak 1st. Soft, humble, personal, smooth. Defying typecast …” Another user called it a “motivating presentation.” Her change to French in the last presentation was also praised, with one user calling it “a great touch by the Korean bid. Who would’ve thought that?”