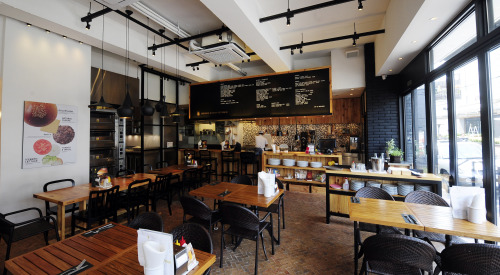 The popularity of burgers is far from waning. Though Seoul is packed with burger joints, new ones keep springing up, proving that this is more than just a craze.

Let’s face it. Meat-in-a-bun is here to stay.

No, we’re not talking about McDonalds and Burger King, which have long been fixtured on the fast-food dining scene. We’re referring to the artisan patty ― hand-formed, smashed, dressed down, dressed up.

If the invasion made full headway into Itaewon, Hongdae and Garosugil, now it is seeping into every nook and cranny of Seoul, including a little pocket of turf flush against affluent Cheongdam-dong.

Both are within walking distance of one another, setting the scene for a potentially fun and heated burger war.

Here’s a play-by-play look at both.

Maeil brought their interpretation to the table in January, taking a Japanese-style slant with small puffy buns about two inches in circumference and dense, plump patties.

Dainty and perfectly plated are the operative words here.

That is quite possible, since what these patties may lack in girth, they make up for in height. Thick and juicy, these babies are created in 11 different ways with a wide variety of generous toppings.

Avocado, creamy and rich, is one of their great additions, but their absolute best is the hearty LOT Burger.

Grilled pineapple, bacon, and a sunny-side-up egg are doused with barbecue sauce for sweet zest and salty crispiness.

The “souffle” bun, sprinkled with sesame seeds, acts as a soft cushion for all the juices oozing from the meat, sauce and fruit ― a must when squeezing and chomping down on the LOT in a vain attempt to get a clean bite out of the over three-inch tower.

By far the tallest of their burgers, Kim recommends the LOT for “guys who like big portions.”

Dill pickles and crunchy Idaho fries accompany every burger. Aside from their meat-in-a-bun options, Golden Burger Republic also puts out a respectable apple crumble and a great hot dog (piled to the nines with onions, relish and jalapeno peppers), making for a well-rounded burger joint. 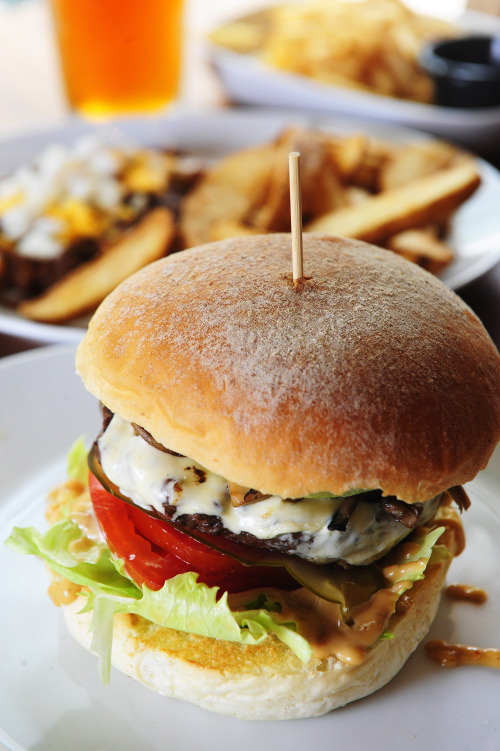 Burger B Kitchen and Bar

The Hongdae favorite has come down south to Apgujeong, bringing its reasonably-priced burgers along with it.

The joint ― which opened in late June ― has been in business less than a month but has already attracted burger-loving patrons, spurred, perhaps, by the fame of the first outlet.

Canadian Alley Kat beer is available on draft. The patties range from around 130 grams to a hefty 180 grams and are spun out into 11 different variations (including a shrimp burger).

So, how does Burger B rework their meat-in-a-bun?

They focus on the cheese.

Melted Tillamook jack adorns a succulent 180 gram patty in their B.B.B. Burger. Blue cheese oozes right out the center of their Blue Stuff burger, and Swiss cheese goes into the mushroom burger.

Buns are just about the right width and thickness, though they vary with the size of the patty.

While the bread factor is important, it’s the meat that truly matters, and Burger B understands that.

Apgujeong’s Burger B Kitchen and Bar owner Jung Sang-chul, 32, revealed that they age their patties for a day in the fridge to make sure that when they cook them, the juices do not escape in the process.

Aged patties are then laid out over a grill and cooked so that they are enrobed with a smoky flavor.

Those who want to revel in pure beefiness can ask for their burgers, sans sauce.

Other perks include milkshakes and a selection of eight bottled brews.