MAASAI MARA, Kenya ― A dozen safari cars stood bumper to bumper along a narrow dirt road on the vast savannah land. All engines were cut. Passengers held their breath. The only interruptions to the sudden silence were sounds of clicking camera shutters and calm sighs of admiration as a male lion emerged from the bush. 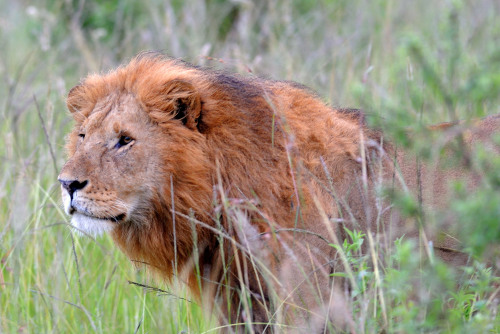 A lion gazes at his game.
Unconcerned with the presence of intruders, the luxuriant-maned big cat strolled past the vehicles toward a small mound and gazed majestically at the vast expanse receding over the horizon at the crimson sunset.

“He knows how best to be taken pictures of,” quipped Lee Dong-hyun, a cameraman from Arirang TV, a Korean broadcaster.

Some fellow travelers aboard the Land Cruiser looked a bit blase after having viewed rhinos, zebras, giraffes, buffalos, cheetahs, elephants and even a pride of lions fighting hyenas over buffalo carcass.

But it was fairly awe-inspiring for a Korean journalist. Flying half a world in search of adventure, he found himself indulged more in the solitude and sense of isolation in a land which British writer Beryl Markham extolled as “mystic, wild … an escapist’s Utopia.”

Maasai Mara was the last leg of their six-day journey in June organized by the Kenyan Embassy in Seoul, Korean Air and Kenya Airlines. 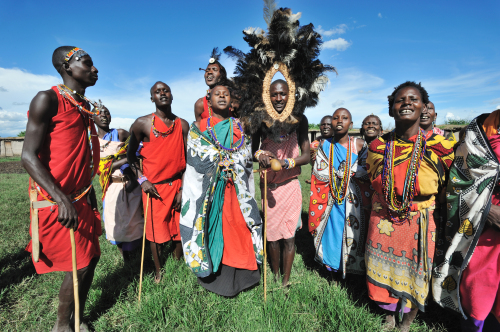 Lake Nakuru is a haven for birds.
They explored some of best spots of “the world’s capital of safari,” starting from wildlife conservancies on the picturesque Mount Kenya, rumbling over bumpy tracks to the flamingo pink rimmed Lake Nakuru and tracing the eastern arm of the immense Great Rift Valley, the only geological feature visible from the Moon.

Covering an area of over 1,500 square kilometers in southwestern Kenya, Maasai Mara National Reserve is Africa’s most popular game destination with an abundance of the fabled Big Five animals ― the lion, rhino, elephant, buffalo and leopard.

The leopard proved elusive, beyond the trained eyes and sense of Kitongat Ole Sitima, a veteran who has been a safari guide for 12 years. “We would be extremely lucky if we find one today,” the driver-guide said.

From July to September, the Mara plays host to one of the world’s greatest natural spectacles when over 1.4 million wildebeests migrate from the Serengeti of Tanzania to the Maasai grassland with the single massive herd traced relentlessly by predators.

For the largest economy of East Africa, tourism is the second largest foreign-currency earner, accounting for 11 percent of its gross domestic product.

Tourist arrivals hit a record 1.1 million last year with revenue jumping 18 percent to 73.7 billion shillings ($820 million), according to the Kenya Tourism Board.

With improvement of infrastructure, a weaker local currency and tourist fear of political chaos in its rival North African destinations, the Kenyan government expects another boom year for 2011.

“Business looks to be good this year and with the trend continuing we are looking at closing the year quite well,” said Msengeti Francis, lodge manager of Sarova Mara Game Camp, which is located right in the center of wildebeest migration path.

June should be a relatively low season but the luxury tented lodge was bustling with guests of various nationalities.

“There has been an upsurge of travel from the Middle and Far East. Travel from the Indian market is during the low season in Kenya as they have the monsoon holidays in India,” he said.

The main draw of the country is the sheer diversity of landscape, wildlife and cultures. Kenya has everything within its border from vast savannah plains to pristine beaches, from equatorial deserts to snow-capped peaks, and from bustling metropolises to timeless rural communities of nomads. 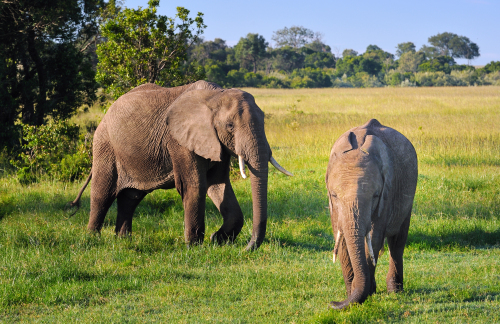 Two elephants roam about.
But the wildlife fiefdom has been under the increasing threat of resurgent poaching, expanding human settlements and devastating droughts in recent years.

The number of lions in Kenya fell from 2,750 in 2002 to about 2,000 today, according to the Kenya Wildlife Service, which runs more than 60 parks, reserves and sanctuaries.

Government, NGOs, the tourism industry have enhanced conservation drives but still face an uphill battle with greedy business interests, climate change and growing conflicts between humans and animals over land.

Through the voyage, the Korean journalists had a chance to get a first-hand look at Kenya’s strenuous efforts to promote sustainable, eco-friendly tourism, key to enabling its most important industry to survive in the long-term.

Across the country, wildlife reserves are tightly protected as designated national parks. Rural villages are compensated for not killing lions that prey on cattle. Their land is rented to be reserved for wildlife. The itinerary also included animal orphanages with staff firmly devoted to animal protection and some bush lodges that use natural energy and resources.

“Here electricity is generated by solar power, lighting and hot water are cut at certain night hours, and wastes are recycled. It sources all food from local farmers,” said Debrah, a clerk of Malewa Wildlife Lodge nestled deep at the heart of the Great Rift Valley.

The cattle-herding people of Maasai tribes receive benefits from tourism in income and employment opportunities.

“There are over 20 Maasai people here and those from other tribes. Working here opens them to a new way of life,” said Ken Kisio, a Maasai driver who has been working in Sarova Mara Game Camp for 12 years.

Within the camp compound is a Maasai village which showcases their way of life far removed from modernity.

“We encourage visitors to go to the village. We also support the park authorities through paying of royalties,” manager Francis added. For its part the local government helps Maasai people with education, medical care and preservation of their tradition.

When the journalists visited their wood-fenced homestead, they showed how to make a fire by rubbing woods, how to build a hut with mud and cattle manure, and how to make a drink using the blood and milk of a cow.

The guests were welcomed by a jumping dance by male warriors dressed in bright red robes and ornaments made of body parts of animals that they killed. Girls bobbed hilariously to the rhythm.

“It is a competition for girlfriends. The higher they jump, the more they get,” community teacher David Leshan, 21, explained.

“We benefit from tourism a lot.” It helps them keep the tradition, receive education and adapt to modern life. His school is equipped with computers and TVs.

The journalists’ trip was capped by the enthralling encounter with the proud descendants of pastoral nomads who shared the land with Africa’s wild fauna in ancient times. Beyond the natural beauty and the thrills of game driving, Kenya offers inspiration for how man should harmonize with animals and land in a sustainable way.