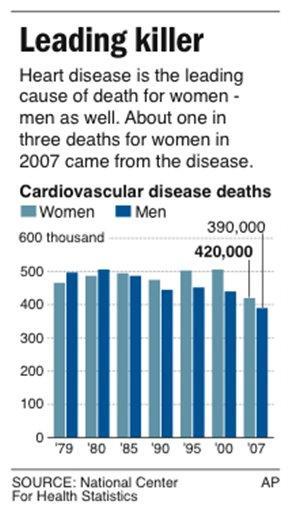 WASHINGTON (AP) ― Heart disease can sneak up on women in ways that standard cardiac tests can miss.

It’s part of a puzzling gender gap: Women tend to have different heart attack symptoms than men. They’re more likely to die in the year after a first heart attack.

In fact, more than 40 percent of women still don’t realize that heart disease is the No. 1 female killer. One in 30 women’s deaths in 2007 was from breast cancer, compared to about 1 in 3 from cardiovascular disease, according to the American Heart Association.

A new report says there’s been too little progress in tackling the sex differences in heart disease. It outlines the top questions scientists must answer to find the best ways to treat women’s hearts - and protect them in the first place.

“A woman’s heart is her major health threat, and everyone who takes care of a woman has to realize that,” says Emory University cardiologist Dr. Nanette Wenger, who co-authored the report.

Make no mistake: Heart disease is the leading killer of men, too. The illness is more prevalent in men, and tends to hit them about a decade earlier than is usual for women.

But while overall deaths have been dropping in recent years, that improvement has been slower for women who face some unique issues, says the report from the nonprofit Society for Women’s Health Research and WomenHeart: The National Coalition for Women with Heart Disease.

Sure, being a couch potato and eating a lot of junk food is bad for a woman’s heart just like a man’s. High cholesterol will clog arteries. High blood pressure can cause a stroke.

But here’s one problem: Even if a test of major heart arteries finds no blockages, at-risk women still can have a serious problem - something called coronary microvascular disease that’s less common in men. Small blood vessels that feed the heart become damaged so that they spasm or squeeze shut, Wenger explains.

Specialists who suspect microvascular disease prescribe medications designed to make blood vessels relax and blood flow a bit better, while also intensively treating the woman’s other cardiac risk factors. But Wenger says it’s not clear what the best treatments are.

The report says part of the lack of understanding about such gender issues is because heart-related studies still don’t focus enough on women, especially minority women. Only a third of cardiovascular treatment studies include information on how each gender responds even though federal policy says they should. The report urged direct comparisons of which treatments work best in women, and improved diagnostic tests.

Another issue: Even young women sometimes have a heart attack, and there are troubling hints that their risks are rising. There’s been a small uptick in deaths among women younger than 45. Plus, high blood pressure, diabetes or related complications during pregnancy - a growing worry as more women start their pregnancies already overweight - aren’t just a temporary problem but increase those mothers’ risk of heart disease once they reach middle age. The report says too few doctors are aware they should consider that.

Then there are the questions of how best to tell which women are at high risk. Nearly two-thirds of women who die suddenly of heart disease report no previous symptoms, for example, compared with half of men. As for heart attacks, chest pain is the most common symptom but women are more likely than men to experience other symptoms such as shortness of breath, nausea and pain in the back or jaw.

Legislation pending in Congress would require better study of gender differences, and would expand a government program that currently screens poor women in 20 states for high cholesterol and other heart risks, offering smoking cessation and nutrition education to help lower those risks. Wenger’s groups, which receive some funding from drug companies, and the heart association support the bill.

One young patient says women need to know more about heart disease - and to get pushy about any symptoms.

Essence Harris of New Orleans was just 30 and seemingly healthy when she started getting short of breath and feeling a flutter in her chest during her daily workouts. Her primary care doctor thought it was panic attacks. A cardiologist found no obvious risk either ― her cholesterol and blood pressure were normal - but ordered a stress test that signaled her heart fears were right. A further exam found severe blockages in two arteries that required stents to prop open.

Now 37, Harris says doctors’ best guess is that a stressful lifestyle ― a single mother, a full-time job, a part-time personal trainer, and studying for an advanced degree all at the same time - left her vulnerable even without obvious risk factors. Had she not been so fit, they said, her heart might not have held out as long before symptoms appeared. She’s learned to be more laid-back, along with a healthier diet and keeping up that exercise.

“Listen to your body,” she advises other women. “Nobody knows you better than you.”