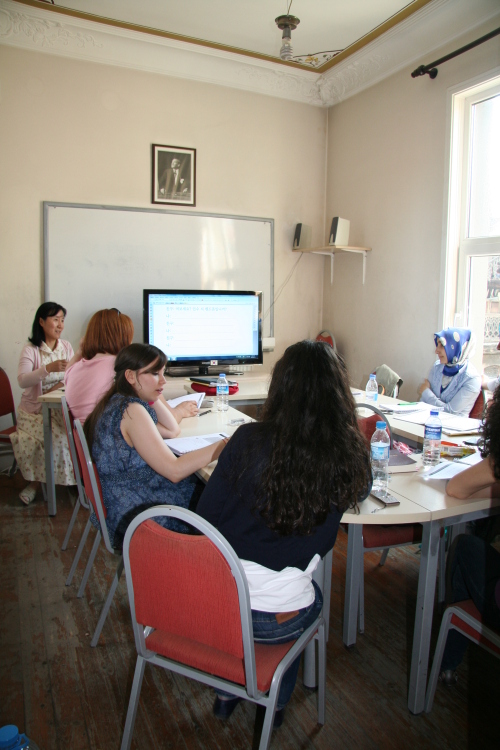 A Korean-language class in session at the King Sejong Institute in Istanbul on June 25
ISTANBUL ― At many K-pop fan group and Korea-related community meetings in Turkey, it is not difficult to find young Turkish people speaking Korean phrases.

Most of the Korean-speaking youngsters are self-taught: using Internet sites that teach Korean or learning by watching Korean dramas and picking up words and phrases.

With the number of fans of Korean dramas and K-pop quickly growing, so has the demand for Korean language classes.

“We noticed the rising interest in Korean language two to three years ago,” said Kim Gun-su, manager of King Sejong Institute’s Istanbul branch. The Korean Culture and Information Service currently operates two King Sejong Institutes, Korean language schools, in Turkey ― one in Istanbul and another in Ankara ― at language institutes operated by Ankara University. The Korean government would like to expand the school to a total of 12 throughout the country. 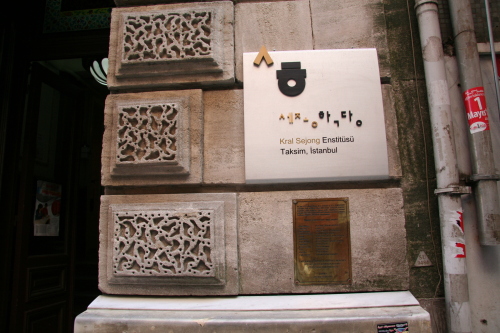 At the Istanbul branch, which opened its doors in January 2011, 33 students are learning Korean at three different levels. The classes are taught by three Korean teachers who are long-term residents of Turkey who also have more than 20 years of teaching experience in Korea. Each term lasts 48 hours with two three-hour classes each week.

While most Korean language classes in Korea are taught completely in Korean, here, grammar is explained briefly in Turkish before extensive drills take place.

The students range from teenagers to those in their 30s. “About half of them are interested in Korean culture, about 30 percent wish to work in Korean companies and some 15 percent are preparing to study at college level in Korea,” Kim explained.

At a class that has been learning Korean for six months, students speak in clear Korean. “Turkish language is similar to Korean,” says Havva Mizrak who first learned Korean on the Internet and through K-pop. Others have learnt Korean through Arirang TV’s “Let’s Learn Korean.” Another student said, “College studies are difficult but Korean lessons are okay,” in fluent Korean.

While the students found pronunciation to be the most difficult aspect of learning Korean, they generally make quick progress. “I expect that they will be able to complete intermediate level classes after the first year,” said Kim.

Since the goal of the King Sejong Institute is to promote Korean language as widely as possible, the school offers discounted tuition for school students, Korea-related fan club administrators and people engaged in providing Turkish subtitles to Korean dramas and films.

Mehtap Gatar, a junior majoring in international relations at Istanbul University, who has been studying Korean for six months at the King Sejong Institute, will soon be leaving for Korea where she will spend a year as an exchange student at University of Seoul. She is the first King Sejong Institute student to be going to Korea to study. She expects to take five courses taught in English and Korean language classes. “I want to learn the culture of Korea. And I want to be a bridge between Korea and Turkey,” Gatar said.