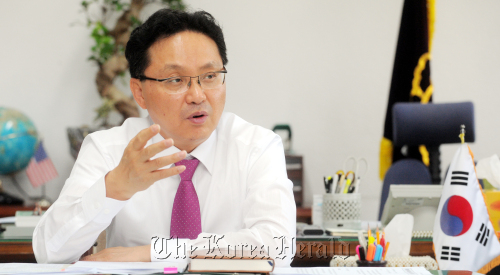 Cho Myung-chul, the new chief of the Education Center for Unification, the highest government post to be taken by a North Korean defector, talks in a recent interview with The Korea Herald. (Ahn Hoon/The Korea Herald)
Defector-turned-official vows to emphasize the positive side of unification

Regardless of the amount of effort South Korea makes to engage its northern rival in talks and reconciliation, it will have a hard time achieving the ultimate goal of reunification until North Korea’s ironfisted regime comes down once and for all, a Pyongyang professor-turned-Seoul official said.

Cho Myung-chul, who was named last month the head of the Education Center for Unification, the highest government post to be taken by a North Korean defector, said it was important for everyone here to know North Korea inside and out.

“The government must not make it seem as though the ultimate goal is cooperation and better ties (with North Korea),” Cho said in an interview with The Korea Herald. “Our ultimate goal has to be taking down the North Korean system and achieving reunification.”

“We must know that any kind of bad situation, like the current suspension in dialogue, is not due to our wrong policies, but the fact that North Korea has been, and still is, unwilling to change,” said the former professor of Kim Il-sung University, Pyongyang’s elite institution named after the country’s founder.

And the North Korean regime “is certain to collapse” one day, he added.

“No one can specify the date, but history tells us it will,” Cho said, citing signs of deepening financial difficulties, human rights abuse and mass defection North Korea shows as the former East Germany and Romania did.

“He has been trained in his father’s visions and ideology. How could North Koreans look forward to anything different from the current poverty and suppression?”

Pyongyang’s ailing dictator Kim Jong-il, 69, has been moving to transfer power to his youngest son Jong-un as the second father-to-son succession for the communist state. Although North Koreans approve of the plan on the surface, sources and reports have indicated that many remain skeptical about the capabilities of the incoming leader still in his 20s.

The two Koreas, separated since the 1950-53 Korean War, have walked two very different paths that turned the South into Asia’s fourth-largest economy and the North into one of the world’s poorest. Lacking the ability to feed its 24 million people for itself, Pyongyang often uses its nuclear programs to coax economic assistance from regional powers including the U.S. and South Korea.

Relations between the two Koreas, who technically remain at war as their conflict ended in a truce rather than a permanent peace treaty, remain frozen in recent months after the North conducted two naval attacks that killed 50 South Koreans. Pyongyang denies its role in the attacks.

The two attacks “are undisputable facts that will remain in history,” Cho said, emphasizing the importance of educating the people here “with truth and reality.”

“North Korea is a many-sided country. Until unification, national security must remain number one in education,” he said.

As the first North Korean to be put in charge of unification education, Cho vowed to set up principles that will remain consistent regardless of political changes at home and abroad.

“There will not be any controversy if we keep to the principle to reveal anything and everything that is true,” he said. “Unification is a plan the whole nation should draw up together. It is a national duty that will provide a better future for the Korean Peninsula.”

Cho, who will serve the post for two years, said he will focus on education that tells people “the good side of reunification” rather than the negative side such as the large expenses South Korea will have to shoulder.

Affiliated with the Unification Ministry, which handles inter-Korean affairs, the unification education center is visited by some 8,000 people each year.

Born in 1959 between a minister father and a professor mother, Cho defected to the South in 1994 while serving as an exchange professor in China, leaving behind friends and family he still thinks about and feels guilt for everyday.

“Back then, the only thing I could do to defy that regime was to run here. I was happy to be able to finally say what I want to say (about North Korea), but I will not be truly happy until the regime collapses and we are reunified,” Cho said.

Being a scholar of East Asian and North Korean economy, Cho said he applied for the senior Seoul official post, thinking his years-long study and experience in the North will help design a constructive plan for unification education.

Since June 8, when he was officially appointed to the post, Cho has been so busy that he hasn’t been able to return home by nearly midnight each day.

“I am finally getting the grasp of what I have to do in this post,” he said. “I will draw up education plans that tell as many people as possible about the realities in North Korea.”