While idol-centered K-pop has been heavily covered by the media, the Korean indie scene has received relatively little attention. Seeking diversity of Korean music, The Korea Herald is running a series of interviews shedding light on the Korean scene. This is the third installment of the series. ― Ed.

Chang Kiha & the Faces, a five-member indie band formed by vocalist, guitarist, percussionist and songwriter Chang Ki-ha in 2008, recently released a second studio album. And the music video of the title song “A Twosome” is creating a buzz, as the first two-thirds of the 3 minute 45 second video shows only hand motions.

Not defining exactly what the hand motions really mean, the movement flows funnily with the beats and lyrics, with a lot of finger pointing. Then, a hand wearing a bride’s glove holds a hand in a bridegroom’s glove. Then, the five poker-faced male members with one hand gloved hand each dance to the music at the end.

“I thought hands could represent humans. I also thought that music should serve the visual image,” said Chang Ki-ha in an interview with The Korea Herald.

The lyrics to “A Twosome” vaguely describe what’s going on between two people, rather than directly saying that they are in a relationship.

“It’s an open-ended question. Of course, I had something in my mind when I created it, but it is much more fun not to tell the audience what it really is,” Chang said. 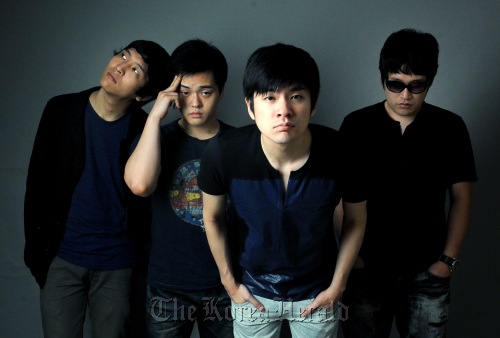 Indie band Chang Kiha & the Faces members, minus guitarist Lee Min-ki, pose for a photograph before an interview in Seoul on June 29: (From left) Jeong Jung-yeop on bass, Kim Hyun-ho on drums, Chang Ki-ha on vocals and Lee Jong-min on keyboards. (Park Hyun-koo/The Korea Herald)
Other tracks, such as “I Have Nobody to Miss But … ,” “Midnight Phone Book” and “Although I Heard Nothing to Feel Bad About … ” also tell how every story has two sides.

Although Chang composes all the songs, the other members said they had no complaints about the songs, except for the quite demanding, weird but funny choruses.

“Ki-ha makes everything himself ― the melodies, guitar lines, drums and even chorus ― and when he made the first album, there was no single thing that I wanted to change,” said keyboardist Lee.

“The demanding part is the chorus because we have to play instruments at the same time. But in the end, we all came to do it and I think it’s really cool.”

The band also included female chorus duo Mimi Sisters in the first album but the duo left the group in 2010.

Unlike many other indie bands to come out of the Hongdae scene, Chang Kiha & the Faces earned quick fame with debut single “Cheap Coffee” (2008).

Despite the CD being burned at home on PCs and skeptical reviews by critics saying the song had little popular appeal, it sold more than 10,000 copies through word of mouth. The group even won three awards at the 2009 Korean Pop Music Awards ― Male Artist of the Year, Best Rock Music for “Cheap Coffee” and the Song of the Year for “Cheap Coffee.”

Their first studio album “Living the Nothing Special Life,” released in February 2009, has sold more than 52,000 copies as of May, according to the band’s indie music label BGBG Records.

Now, Chang frequently appears on TV shows and radio programs and is close friends with celebrities such as singer Lee Hyo-ri and singer-songwriter Lee Juck.

“Just because you’re in an indie band doesn’t mean you should hang out with indie people only,” said the 29-year-old, who applied a similar logic to making indie band music and pursuing popularity simultaneously.

“Popularity comes and goes. But if you do pop music, you need to get famous. But I don’t mean to say that earning popularity is everything,” Chang said.

Even though the band has become famous, the members said in unison that they do not want to go for a major label. They said they will keep doing indie music, for the sake of “musical freedom.”

“We’re an indie band. As we don’t get investment from a major capital, our musical freedom is guaranteed,” said Kim, who used to be a drummer for Broccoli, You Too.

“We will not go to a major label. I like the way we are now.”

The latest album, consisting of 11 tracks, is something you should listen to attentively, by playing the CD on a stereo and putting on a headphone, rather than sharing an earphone with your friend on a subway, Chang said.

“People used to think of us as a ‘funny’ band, probably our looks were more focused with the duo Mimi Sisters,” said Jeong.

“But the second album offers more fun in musical sounds, with upgraded co-producing by Chang and Yohei Hasegawa (the guitarist of Kim Chang-wan Band).”

The band is getting some attention from overseas as well. The act debuted in Japan last year and is releasing the second album in the coming fall.

“We’re going to have concerts in Japan in the fall and it’s okay even if we don’t get famous there. Being on a stage with other Japanese bands and seeing them playing will be very helpful for us,” Chang said.