[ The Korea Herald – Send E-mail ]
Go-to chef Tal Ronnen becoming new face of veganism
By 김후란
Published : Jul 1, 2011 - 18:57
Updated : Jul 1, 2011 - 18:57
LOS ANGELES ― Tal Ronnen catered the vegan wedding for Ellen DeGeneres and wife Portia de Rossi. Casino mogul Steve Wynn tapped him to add vegan dishes to the menus at all 22 restaurants at the luxurious Wynn and Encore resorts in Vegas. Former McDonald’s executives invited him onboard to help launch a chain of healthful fast-food restaurants later this year. And when Oprah decided to try the vegan thing, Tal was her guide. (She calls him the best vegan chef in America.)

But here’s the real secret behind his ascension to first-name-only status as a vegan rock-star chef: He thinks like a meat eater.

“So many people tell me, ‘I could be a vegan if it weren’t for bacon,’ and I tell them, ‘Be a “vegan” who eats bacon,’” Ronnen says with a shrug as he sits in the sun-dappled dining room of his loft in downtown Los Angeles.

Ronnen sighs. “Real militant vegans hate when I say that. But if you are cutting back on the amount of meat that you eat, you’re still doing something great for your health, for the planet and for the animal.” 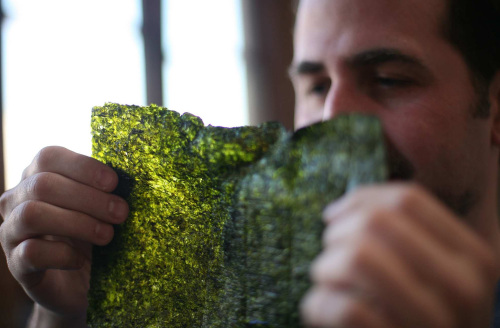 Tal Ronnen is a Los Angeles-based vegan chef whose business is taking off as he tries to convince the world (and Oprah) that going vegan is both easy and delicious. (Los Angeles Times/MCT)
He’s part of a new breed of vegans and vegetarians who are taking the movement back from those militants brandishing bumper stickers that admonish us not to eat anything with a face. Ronnen and others like him, including author Kathy Freston, urge the masses to “lean into” vegetarianism and veganism by simply embracing a vegetarian or vegan meal a few times a week. If they have a rallying cry, it just might be “Meatless Mondays.”

Their target audience is meat eaters who are intrigued by going vegan or vegetarian, but are afraid to give up meat (especially bacon) because they fear they’ll spend the rest of their lives looking at a plate of rabbit food. And Ronnen doesn’t blame them.

“I just can’t do the ‘throw some vegetables and a starch on a plate’ thing,” he says. “That’s the problem with most vegan dishes. It’s a portobello mushroom cap, or a pasta primavera, and when you’re finished with dinner you have to hit the drive-through. You have to give people something that will satisfy them. And that’s a protein-based plate.”

The classically trained chef believes it’s his mission to inspire chefs across the country to take on that challenge. “If I could get one point across, it would be this: Being a vegan is not about depriving yourself. If you sit around eating lettuce and carrots all day because that’s what you think vegans are doing, you’re doing it wrong.”

This relatively simple approach ― designing a vegan menu with the protein front and center, not just paying it lip service ― is nonetheless revolutionary in the food world. And Ronnen takes it several steps beyond: He is leading the way in transforming vegan fare into haute cuisine.

“We’re just beginning to see what is possible with vegan food, and Tal is at the forefront of that movement,” says Bon Appetit restaurant editor Andrew Knowlton. “Tal is an artist. He is just beginning to open a window onto the possibilities of what vegan food can look like.”

It’s hard to pinpoint the exact moment when the vegan movement started to change. Freston, the blond dynamo at its forefront and author of the new book “Veganist,” credits a perfect storm. The eco-friendly movement took notice of the environmental costs of eating meat. The economic slide and rising food costs nudged beef, chicken and pork closer to the “luxury” side of the ledger. Add in the health benefits and celebrity-and-beauty quotient ― the gossip mags breathlessly announcing that “Glee” star Lea Michele’s sleek new body could be attributed to a vegan diet, for example ― and it was on.

But the movement can go only so far without taste. And that’s where Ronnen comes in. “This is about delicious food,” said Wynn, who recently adopted a vegan lifestyle for health reasons, lost 30 pounds and called for the menu makeovers at his restaurants so he would always have something to eat.

Revamping the Wynn menus has not just been good for the boss. It’s been good for business: Wynn says they’ve been a hit with customers, and are creating a new niche market for those who want more than greasy, fatty food options or a buffet.

Ronnen became a vegetarian as a teenager to impress a girl, and then went vegan for humanitarian and health reasons. A graduate of New York’s Natural Gourmet Institute, Ronnen pays homage to French culinary roots by taking those classic elements and playing with the layered flavors and textures until he finds a vegan alternative. “I love that challenge, trying to come up with something vegan that is as good or better.”

That approach was honed after years working in East Coast kitchens including vegan hot spot Candle 79 in New York and helping to reopen vegan restaurant Sublime in Florida’s South Beach. He considers chef David Anderson of Madeline Bistro in Tarzana one of his mentors. His crossover into celebrity came when he partnered with rocker and animal rights activist Chrissie Hynde in opening the restaurant VegiTerranean in Akron, Ohio.

Although the fanfare surrounding Ronnen has been a boon for his business ― his cookbook, “The Conscious Cook,” became a New York Times bestseller and was repeatedly named one of the best cookbooks of 2009 ― he’s uncomfortable in the spotlight. At last month’s Viva Las Vegan, a celebration of vegan food held at Wynn’s resort, Ronnen, 36, had to be cajoled back onstage again and again during the demos and told repeatedly to look at the cameras and smile during photos ops.

“I hate the camera. I hate talking on camera. I’d be happy to never see another camera again,” he later says, recalling Vegas.

It’s his behind-the-scenes role as a guide and a teacher that excites Ronnen most. Trying to make a seafood stew? Sauteed oyster mushrooms can offer up a texture similar to the seafood that shares their name. The flaky texture of a crab cake is easily reproduced, he says, using fresh hearts of palm braised in seaweed. Looking for a smoky seafood flavor? Toast sheets of nori, grind them up and use it as a dusting or flavor accent. Eggless pasta is one of his specialties. He reaches for Gardein protein ― he is a consultant for the popular vegan line of meat substitutes ― whenever a dish calls for chicken or beef.

But what about butter and cream? No problem, Ronnen says. He uses an olive oil spread for butter, and a silky “cream” made of cashews that have been soaked overnight and then pulverized until the texture reaches luxurious. Truly, it’s hard to tell the difference.

Ronnen believes it’s his mission to help move the vegan movement forward. He volunteered to work his way across the Cordon Bleu culinary program’s campuses, offering demos and tutorials. It’s a calculated bid to encourage new culinary students to think vegan before they head out into the nation’s kitchens.

The result is a harried lifestyle. The Wynn makeover continues through the summer. Between those trips to Vegas, his consulting work with Gardein in Canada, his Ohio partnership with Hynde, TV appearances with Freston and Cordon Bleu duties, Ronnen rarely spends the night at his L.A. loft.

In fact, he’s been there more than 18 months and has never cooked a meal there, not once. He said he’s not even sure the stove works and looks forward to trying it out “when things slow down.”