It’s that time of year again, when children gather around convenience stores to pick up their favorite ice cream bars and all throughout the city people are forsaking standard hot Americanos and cappuccinos for iced caffeine.

Cold noodles, of course, are also an all-time summer favorite.

Naengmyeon (cold Korean noodles) is a classic, but why not change it up and go for some cold ramen?

After all, while steaming bowls of noodle soup are not entirely enticing when it’s hot out, cold, chewy strands soaked in chilled broth are.

Here are two establishments that do cold ramen full justice. 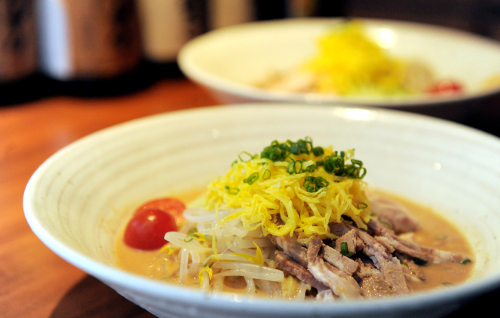 Housed in Dongbuichon-dong a.k.a. “Little Tokyo,” Seoul, this Japanese interpretation of a Chinese restaurant makes a lip-smacking, refreshing combination of bouncy, wavy yellow noodles dressed in a sesame seed-based sauce.

Silvers of cold cucumber, bean sprouts, chicken, chashu (braised pork) garnish the top. To get their dish uber-cold, the bowls are chilled in advance.

The nutty, slightly sweet sauce is what makes the ramen pop. According to Ruo manager Kim Byeung-soo, 32, the secret lies in their exclusively-imported sesame paste, which is made from peanuts and sesame seeds.

Aside from their cold sesame Chinese noodles, Ruo also specializes in a soy-sauce version and has recently added another cool entree to their menu.

A Sichuan dish, dan dan noodles are traditionally done up hot and spicy, but Kim said they are eschewing the chili oil and putting in some vinegar to give it a fresh kick.

To get there, go to Ichon Subway Station Line 4, Exit 4. Walk two blocks, cross the street, turn left and walk approximately two blocks. Ruo will be on your right. For more information call (02) 792-4997. 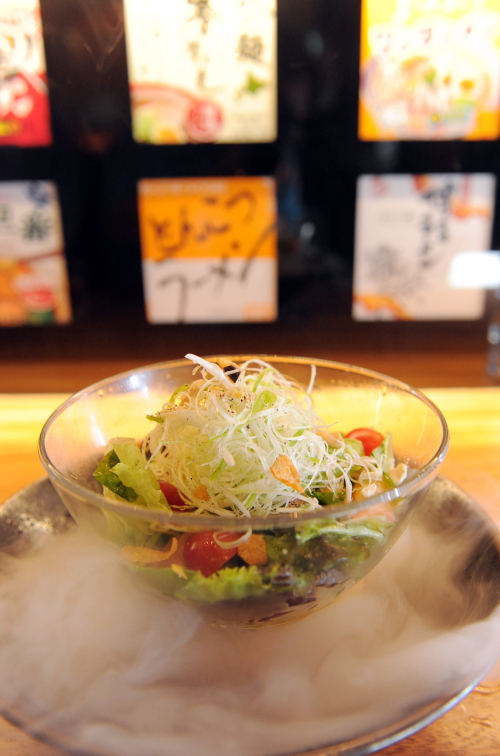 The first Seoul outpost of this Japanese ramen chain opened in late May of this year, but its fame precedes it.

There are more than 40 shops in Japan alone. One opened in New York several years ago, followed by two in Singapore.

Not only do they whip up a powerful pork broth, they also make their own noodles.

Freshly-made noodles are a major plus when the mainstay of a restaurant is its ramen.

Ippudo, however, knows that great basics may form the foundation of good food, but that it doesn’t hurt to kick out great presentation to boot.

Their cold noodle salad ― which, unfortunately, is only available after 5 p.m. ― is served to dramatic effect, with the bowl propped up over a bed of dry ice, so that as you dip your chopsticks into each yuzu sauce-dressed noodle, fog wavers and wafts around the bowl, adding a visually cooling effect to the experience.

Juicy chunks of grapefruit, sweet cherry tomatoes and lettuce enhance the refreshing nature of the salad. The only element that seems out-of-sync with the rest of the dish is the dried whitebait, which gives off a slightly briny, fishy flavor.

For ramen-fiends looking for a soupy version, Ippudo’s cold ramen, specially developed for Seoul, sends a nod to the Korean passion for spice by putting a little bit of chili oil into their broth.

Wasabi and grated daikon radish take the cold factor up a notch and get soaked into the curl of the fresh, house-made yellow noodles. The only potential place for improvement is in the soy sauce-based soup, which may come across a tad salty.

Then again, when you get to dine on noodles with chew, bounce and gloss like the ones at Ippudo, who’s going to complain?

To get there go to Apgujeong Subway Station Line 3, Exit 2 and head towards Galleria Department Store. After crossing the first major intersection, turn right into the street between Shinhan Bank and Caffe Pascucci and walk for several blocks. Ippudo Seoul will be to your left. For more information call (02) 512-2644 or visit ippudo.co.kr