“Drinking for me became like eating used to be ― instant satisfaction,” said the 60-year-old resident of southern Florida. “But I eventually realized food and alcohol were cover for me not taking responsibility for my problems.”

Swapping one addiction for another is common among gastric-bypass patients, who struggle more than the general population with issues of addiction. 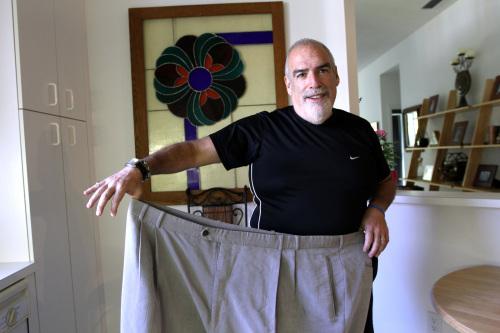 Andrew Kahn of Tamarac, Florida, had bariatric surgery in 2003 and then transferred his addiction from food to alcohol. He checked himself into rehab on Aug. 26, 2010, and has been sober ever since. Here he poses with his size 64 pants. (Sun Sentinel/M)
Marty Lerner, a psychologist and clinical director of Milestones in Recovery, a residential-eating-disorders program in Fort Lauderdale, Florida, sees many patients who’ve transferred their food addictions to other substances or behaviors.

“Alcohol and drug dependencies are the most common,” he said, “followed by compulsive shopping and sex addiction.” In every case, people are substituting one form of self-medication for another.

So far the most-studied of these transferred addictions is alcoholism.

Patients who undergo gastric-bypass surgery are four times more likely to require inpatient care for alcohol abuse than the general population, according to a study presented last month at the Digestive Disease conference in Chicago.

The study, which followed 12,277 bariatric surgery patients over 25 years, also found that gastric-bypass patients were more at risk for abusing alcohol than those who had restrictive procedures, such as banding.

The reasons for the addiction transference are both psychological and physical, say experts.

Because gastric-bypass surgery causes food and drink to move past the stomach and directly into the small intestine, alcohol hits patients faster, said Magdalena Plecka Ostlund, lead researcher on the study conducted at the Karolinska Institute in Sweden.

“The alcohol enters the small intestine rapidly, which results in a high and quick peak of alcohol in the blood,” she said.

“Some don’t like that effect, but some like it a lot,” said Dr. James Mitchell, chairman of neuropsychiatry at the University of North Dakota School of Medicine and a researcher involved in a bariatric study funded by the National Institutes of Health.

“Bariatric-surgery patients have a two to three times greater chance of moving onto another substance addiction,” estimated Mitchell. “This isn’t a huge problem, but the population is definitely at increased risk.”

The other driver is mental. “When you take away someone’s primary addiction, in this case food, they often need to build their world around something else,” said Mitchell.

For Sue Jacobsen of Long Island, New York, that something else was alcohol.

Like Kahn, Jacobsen considered herself a light, social drinker before her gastric bypass in 2004. “I remember asking the doctor whether I would be able to drink after surgery. He said, ‘Yes, but you need to know it will hit you harder.’”

Did it ever. Jacobsen, a 47-year-old, 5-foot-8-inch, public-relations consultant who quickly went from 275 pounds to 167, had her first cocktail three months after her surgery. That was the brink of a slippery slope.

She started drinking more, and within a year was drinking often with friends. “When I did, I would get blitzed.”

Soon she couldn’t go a day without drinking. Blackouts were common. “I’d wake up and have mud on my clothes and calls on my cellphone I didn’t remember making.”

She went to her first 12-step program in September 2006, and has been sober and attending meetings ever since.

“I’m happy with my weight today,” said Jacobsen, “but I paid quite a price.”

But the excess skin that sagged from his belly like an apron depressed him. Like many patients who lose a lot of weight, Kahn’s skin didn’t shrink with the rest of him. “It just hangs there. I hate looking at it,” he said.

Though his insurance covered his weight-loss surgery, in 2008 the company declined to pay for the skin-reduction surgery, which is considered cosmetic. And Kahn couldn’t afford the $10,000.

That’s when he started drinking. “My finances were bad, I couldn’t do anything about the extra skin, which depressed me, and vodka would tell me everything was OK.”

Though he wasn’t much of a drinker before his surgery, and he hadn’t had any alcohol for five years since the procedure, that changed.

“If I had one to two drinks, I could get very stoned very quickly.” Soon one to two drinks became five to seven miniature bottles of vodka. He started drinking in the morning, and often woke up shaking. “Drinking made me boisterous and destructive,” he said. “My wife was furious with me.”

Last August, he checked himself into a detox clinic.

“The increased risk for alcoholism after gastric bypass should be balanced against the many positive health effects of the surgery and weight loss,” said Ostlund. “Surgeons have to advise patients to consume alcohol with care.”

Before he operates, Dr. Raul Rosenthal, a bariatric surgeon in Fort Lauderdale, says he puts patients through a psychological exam to be sure they can withstand the adjustment.

“We look at their alcohol and tobacco use, and other addictive behaviors,” he said. “It’s important for patients considering the procedure to be told that the risk exists, and that if they had a tendency to drink before, they will need to be very careful.”

Jacobsen, who is working to conquer two more addictions, seconds that. “I’m a smoker and a Diet Coke fanatic,” she said, adding that she drinks three, 44-ounce Super Big Gulps a day.

“The Diet Coke addiction is the next to go,” she said, “but at least I can’t get pulled over for that.”