His remarks are in line with Hyundai Motor and its affiliate Kia Motors’ road map to catch up with European and Japanese carmakers from its earlier business strategy focused on product stabilization.

Chung visited a sales corporation of Hyundai-Kia in Los Angeles and manufacturing factories in Alabama for Hyundai and Georgia for Kia this week. 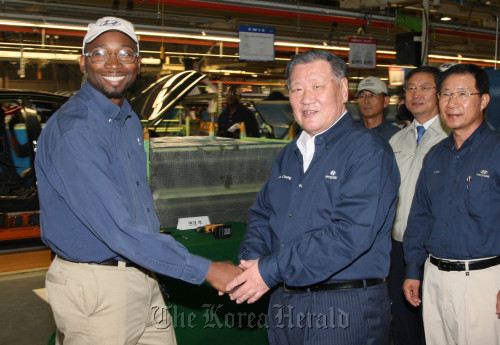 Hyundai Motor Group chairman Chung Mong-koo (right) shakes hands with an American worker during his visit to a Hyundai factory in Alabama, the United States, Tuesday. (Hyundai Motor)
“Beyond the products which simply satisfy consumers, it is time for us to touch their heart by providing them with best level-quality products,” he told employees there.

“Should we be satisfied with the present performances, I believe there will be no further development,” he said.

Chung also said he is certain that the group’s current capability far surpasses its performances over the past decade.

While Hyundai-Kia’s market share in the U.S. stayed at 3.3 percent in 2001, they captured 7.7 percent of the market last year.

Their sales have continued to grow to post 10.1 percent in the U.S. market share in May, taking the fifth position in ranking among global automakers.

Observers in the automotive industry say that Chung’s latest remarks seemed to stem from emerging concerns over quality and safety issues after Toyota Motor’s recall.

“The voluntary recall of Hyundai’s Sonata sedan earlier this year to replace some front door latches could be understood in the same context,” a vehicle dealer said.

Chung has been emphasizing quality-based management from the early days as chairman.

Hyundai Motor Group vice chairman Chung Eui-sun, the only son of Chairman Chung, has also said Hyundai’s biggest challenge is to secure competitiveness in terms of quality in order to improve the brand image.

“As seen from earlier examples (at Toyota), quality issues should be prevented from occurring in the first place,” he has said.