North Korea opened the floodgates of the Hwanggang Dam Monday night without warning, sending a wall of water across the border, Seoul sources said Wednesday.

In September 2009, the North released about 40 million cubic meters of water from the dam into the Imjin River near the border. 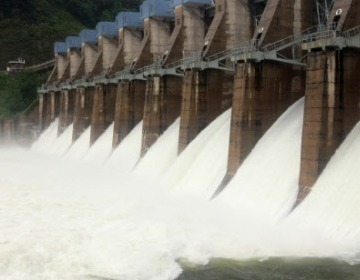 Water flow down from Chunchen Dam on Wednesday after officials opened floodgates in response to heavy rains that hit the northeastern region. (Yonhap News)

The flashflood caused by the discharge left six South Koreans dead, in what some called a “water attack” from Pyongyang.

“North Koreans opened the gates Monday night and have yet to close them,” a Seoul official said.

It takes about 10 hours for water from the dam to reach the southern border area.

“The discharge has yet to cause serious damage in the southern parts of the Imjin River,” the official said.

But Seoul officials are concerned as heavy rains are continuing in both Koreas.

The water level on the Pilseung Bridge in the southern part of the border reached 4.49 meters as of 8 a.m. Tuesday, well over the warning level of 3 meters. It fell to 4.03 meters at 4:20 p.m. Wednesday.

The North Korean military did not notify the South of the release, he said.

In 2009 North Korea expressed regrets over the incident and pledged to make a notification before future dam releases.

On Wednesday, one person died and several others were injured after a landslide caused by rain that hit South Korea.

Scores of buildings were submerged by up to 170 millimeters of rain while traffic accidents have been reported in the center of the country. (Herald Online)