Lee Jong-joo, however, did not disclose the details of the talks, saying she currently had no more information. 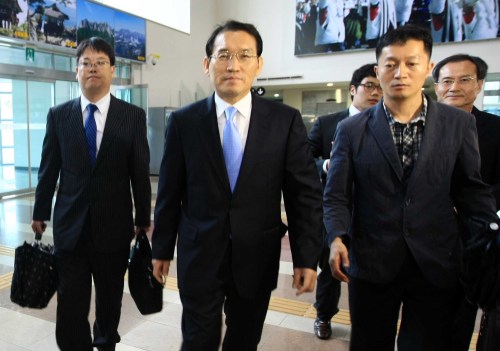 South Korean government officials and company representatives are about to leave a checkpoint in Donghae, Gangwon Province, Wednesday, before crossing the border toward North Korea’s Mount Geumgang to discuss how to deal with the remaining South Korean property there. (Yonhap News)

Another ministry official told reporters on the condition of anonymity that North Korea had said there “will be no talks” with the South Korean government officials present, demanding to discuss the issue only with the firm representatives.

“I am in wonder if North Korea had really wanted to earnestly discuss the issue at all,” he said.

As talks were being held, an unidentified Pyongyang spokesman issued the threat of a “sacred war” against South Korea, accusing its army units of using slogans that slander the North. Seoul should be prepared for “unpredictably disastrous consequences” should these actions continue, the official said.

The North’s top military command issued a similar threat in a separate statement via the North’s Korea Central News Agency later in the day, saying the military will carry out retaliations against the South for insulting the North’s leadership.

The two Koreas had agreed to meet Wednesday to discuss issues related to the South Korean assets at the mountain resort, currently seized by Pyongyang. The North had warned earlier it would dispose of all South Korean property until some sort of measure is taken, demanding representatives of the firms visit for talks.

The two Koreas had launched a joint tour project at the North’s Mount Geumgang in 1998 as a symbol of reconciliation.

The tours, which had been one of impoverished Pyongyang’s main sources of income, came to a halt in 2008 after a South Korean tourist was shot dead by a North Korean soldier when she purportedly strayed into an off-limits military zone.

Restaurants, a fire station, a cultural center, a hot spring, hotels, a golf range, duty free shops and other facilities owned by dozens of South Korean companies have been unused for nearly three years. They were seized by the North last April.

Pressed for outside aid and foreign currency, the Pyongyang regime has been seeking ways of resuming the stalled tours. As South Korea remains lukewarm, the communist state unilaterally terminated South Korean company Hyundai Asan’s exclusive tourism rights to the resort in April and has been threatening to develop the area for international tours.

“North Korea must keep to our previous deal and must not violate the property rights of our firms,” vice-spokesperson of the Unification Ministry Lee had told an earlier press briefing. “We will deliver this position to the North.”

South Korea demands that North Korea properly investigate the 2008 shooting in the mountain resort and set up reliable measures to prevent such a case in the future.

North Korea also conducted two deadly attacks against Seoul last year, turning the South even more reluctant to do it any financial favors. Pyongyang denies its role and has refused to apologize for the two attacks that killed 50 South Koreans.