He married his wife Hyo-Jung not long after arriving to teach on Jeju island in 2005, and the couple had two boys together.

Though he quickly embraced life in Korea, he was not destined to be here long. On March 13, 2009, Nathan passed away suddenly, leaving his young family behind. 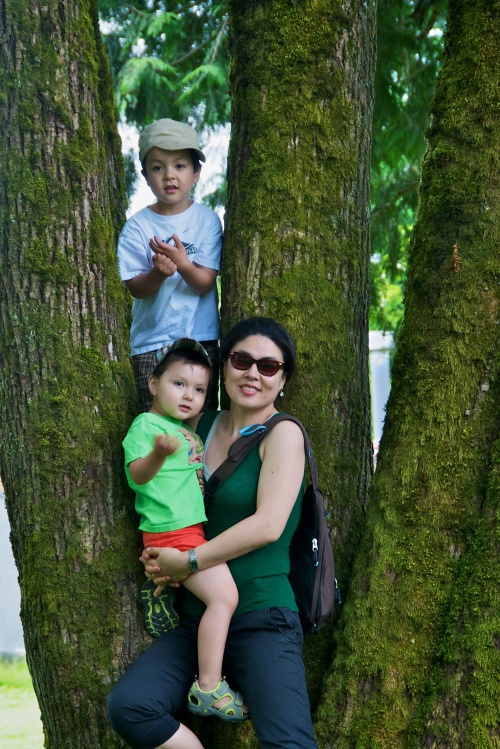 Hyo-Jung Furey with her two sons Juno and Noah. The three moved from Jeju to Canada to be with her husband Nathan’s parents after he died in 2009. (Betty Furey)
But two years on ― a charity formed in Nathan’s memory has raised more than 20 million won for his family and others.

“It wasn’t something that anyone saw coming,” said the charity’s founder and Jeju resident Daniel Nabben.

“We were playing Frisbee on the Saturday evening, but by the Sunday evening he was pretty much gone ― you couldn’t communicate with him anymore. He checked himself into the hospital that Sunday morning and five or six days later he passed away.”

Doctors said Nathan probably died of Encephalitis ― an acute inflammation of the brain.

Shortly after Nathan’s death, Hyo-Jung moved with their sons Juno, now aged 4 and Noah, 3, to Canada to live with Nathan’s parents in Westminster, British Columbia. But Daniel has ensured that the family also receives support from Nathan’s friends in Korea.

He said the group ― named Jeju Furey ― has sent 16 million won to Nathan’s family to date.

“We wanted to raise money for the two boys,” said Daniel. “We thought we should raise some money for their post secondary education.

“The generosity from the foreign community in Jeju was outstanding. We raised the first 16 million in three months.”

Nathan’s mother, Betty Furey, said the money raised by Nathan’s friends on Jeju to help Juno and Noah had been invested, and will go towards Juno and Noah’s education.

She said Hyo-Jung is now working as a chef in an upscale Italian restaurant, and is applying to become a permanent Canadian resident.

“This has been a long process and she has had to study hard to learn English,” she added.

“Her two sons, Juno and Noah are growing up surrounded by many family members who love them. Juno has attended preschool and they both enjoy church activities. Both boys speak fluent English and Hyo-jung works hard so that they will retain the Korean language as well.”

Now, the Jeju Furey fund-raisers have extended their efforts to help another Jeju family in need. Sports events such as a recent badminton tournament have been generating cash to help a Korean grandmother and her two orphaned grandsons, aged 12 and 8, since August, 2010.

“The grandmother is 79 years old and is now raising her two grandchildren after their parents passed away. She gets just 200,000 won in welfare a month, as well as a little bit of extra money by working odd jobs,” Daniel explained.

“All the family’s heating in the winter comes from one electric blanket. I have been to the house to give her the money we have raised and we are talking about real poverty.”

Jeju Furey has already raised 4 million won for the household, and also plans to send more money to the Fureys soon.

“We feel honored that Nathan’s friends continue to work so hard to raise money to help a Korean family whose needs are so much greater than ours,” Betty added.

“Hyo-jung feels it is amazing that the fund-raising continues. Nathan lived his life to help others and he would be so pleased to know that there is a family being helped by money that is raised in his name.”

Jeju Furey will hold its next major volleyball tournament on Oct. 8 and 9.

Daniel said: “Those wishing to come from the mainland to join us should book flights now, and remember that canceling any ticket would only cost up to around 9,000 won. Most airlines take foreign credit cards, and we are happy to help people with transport bookings if they have any problems.”

Those wanting more information can go to the “Jeju Furey” Facebook page, or contact Daniel directly at jejufurey@gmail.com or through http://cafe.daum.net/jejufurey.