Following is the second in a two part series featuring multiple labor unions that will be introduced in Korea on Friday. ― Ed.


The top brass at Korean companies are on high alert over challenges they could face when multiple unions become legal as of July 1.

Conglomerates, some of which have enjoyed years without the nagging presence of unions, must now accept the idea of coping with not one, but several unions.

Multiple unions became possible with a law revision that came as a surprise considering that it came under a conservative government working with a right-wing National Assembly. The previous law had allowed a single union per company.

The opportunities for setting up unions is not limited to employees. Professional union organizations such as the Federation of Korean Trade Unions and the Korean Confederation of Trade Unions are also eyeing up where to expand their presence.

Leading conglomerates such as Samsung, LG and POSCO are understandably keeping busy trying to adapt to the new labor environment.

“We are planning a series of events to keep our employees happy so that they will not want to join these unions too quickly, although of course we have no means or plans to stop them if that is their wish,” said an executive of one of the firms, declining to be identified.

These firms, which have had almost no bad experiences with unions, are hoping to make the best of it by strengthening their labor relations team and stepping up welfare policies to keep union members to a minimum.

Those with fairly big unions are hoping to maintain a status quo, industry watchers said. 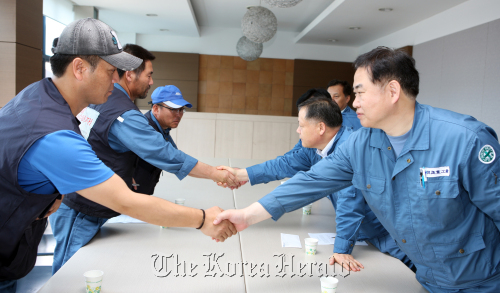 The conglomerates, such as Samsung and POSCO, which have virtually no union presence, are bound to feel the bigger pinch.

One Samsung official said that while the company may not be pleased with the idea of coping with multiple unions, there is no stopping the move as it is the law.

But Samsung is reportedly betting that there would not be too many employees wanting to join unions as its welfare benefits are already the industry’s best.

The company, along with others such as LG and POSCO, claims it has been preparing for multiple unions by reviewing the situation and beefing up efforts to buttress communication with employees.

Workers say they are watching the situation.

“I am not altogether displeased with my workplace conditions, but I do know colleagues who have different ideas,” said one middle manager level worker at one of the conglomerates on the condition of anonymity.

Among some of the changes in the labor landscapes include the fragmentation of unions, meaning labor activity will become more expansive, specialized and complex.

“We may see unions created for the different jobs and functions that employees oversee at their workplace, meaning the number of unions may surge,” said Lee Hee-sung, a senior researcher at Korea Labor Institute.

Negotiations with the management, however, will be conducted between a single union that represents the rest, according to law revisions.

That union would be one where more than the majority of workers belong to. If no such majority union exists, the unions must discuss among themselves to select a negotiating team.

But this did not sit well with the professional union organizations, who believe the largest unions could be under-represented.

The Federation of Korean Trade Unions has issued a constitutional appeal to reverse the clause.

The costs, including time and effort, of coping with multiple unions are the big part of why companies are inwardly cringing.

More firms would have to spend more time talking and negotiating with unions, and this may undermine productivity, as in the case of demonstrations conducted by the unions at the nation’s leading automakers.

Even the companies that do have unions are uneasy, fearing that the new law may prompt their unions to become more aggressive.

Hyundai Heavy Industries, for instance, has had no problems with its unions for almost two decades.

Their biggest concern now is that an extremist union could be established to stir up unnecessary trouble.

“In such cases, the cost of dealing with such unionists would be more than monetary, since we would be spending our time and energy to dwell on and fight over political issues that could eventually undermine corporate productivity,” said one industry watcher.

The Korea Employers Federation that represents the country’s managers argues that if management is required to negotiate with all existing unions, they would spend all their waking hours bargaining with unions.

Korea already has a reputation for stormy labor relations, which have frequently been regarded as a turnoff for foreign investors.

The automakers, meanwhile, were less concerned.

The sector is already subject to frequent, violent rallies. The unions at the auto companies also are specifically categorized, with a different union existing per factory and assembly line.