BEIJING ― Professor Lee Yu-seung arrived in Beijing in 2003, at the Korean department of Beijing International Studies University, where its Korean curriculum was officially launched as an undergraduate degree program the year before.

“They needed a native Korean professor from Korea for the undergraduate degree program,” Lee told The Korea Herald at his office in Beijing. “I was teaching at Dongguk University in Korea prior to coming to China.”

Since its launch in 2002, the Korean program at BISU has grown into the biggest Korean studies program in Beijing with more than 200 students, according to Kim. Compared to the program at Peking University, the BISU Korean program offers more practical education on Korean language, history and culture, Lee said. 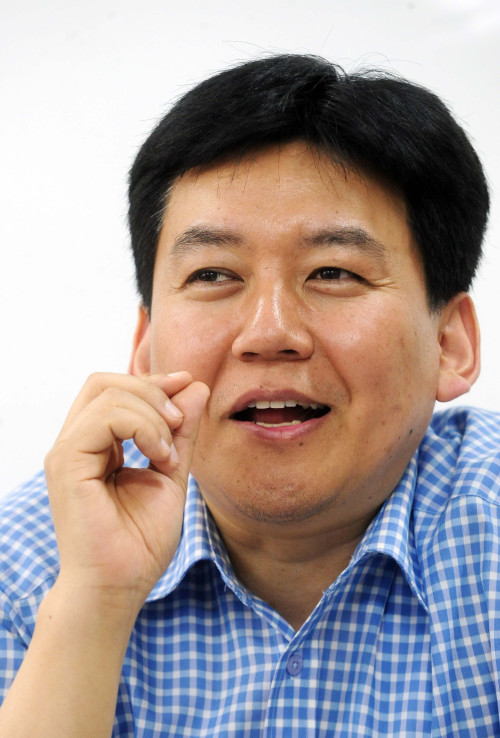 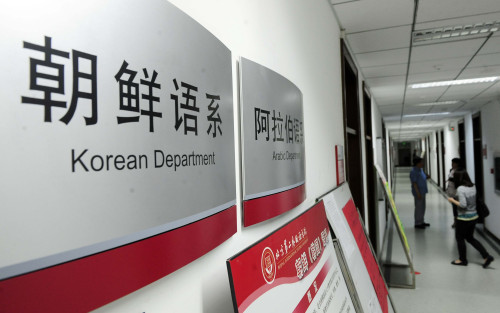 The Korean Department at BISU in Beijing.(Park Hae-mook/The Korea Herald)
Founded in 1964, the BISU has made foreign studies its major focus and tourism management a key research area.

“There are a lot of opportunities for our graduates, as ability to speak and write in Korean is a huge asset in the Asian market. Many go into banks, big-name companies, work for the Chinese government, and even go to graduate schools.”

“Every first-year student has to take a course which gives them a basic and general understanding of Korean culture and history.”

Almost all of the students in the program had absolutely no experience of learning Korean language before coming to the school, Lee said. Upon graduation, most of them acquire a level of Korean language ability that equals that of an average Korean high school student.

“I would say about 30 percent of the students lose their interest and drop out in the middle of the program.”

Lee, who has also been teaching Korean literature and language at Korean Cultural Service in Beijing, China, since 2004, said hallyu has motivated his students to learn more about Korea.

“I would say my students at the culture center are generally more enthusiastic about learning Korean as they are actually spending their leisure time to learn the language, whereas the ones at the university take it as their academic duty,” Lee said.

“Yet I get more students responding when I talk about Korea’s pop culture, movies, fashion and big-name celebrities.”

Yet Lee pointed out that the success of hallyu is different from the state of Korean studies in China.

Having taught almost 10 years in Beijing, Lee said there are certain things that Korean-born professors should be considerate of when teaching literature to local Chinese students.

“Because of the political climate here, most students here are very much used to censoring themselves before speaking up about anything in class,” Lee said.

“They generally do not share their opinions freely. But for literature classes, it’s inevitable to discuss the universal themes such as human intimacy, politics, and human psychology. So it is important that you meet them outside of your class and help them expressing themselves.”

Lee also pointed out that Chinese students who study in Korea expressed only a 40 percent satisfaction level with their learning experience in a recent survey.

“Because of their social and political upbringing, Chinese students require a specialized language program that can meet their specific needs,” Lee said.

Lee also said that though many of his graduates are hired at local branches of Korea’s big-name corporations, such as LG and Samsung, most of them don’t get used to the work culture and end up quitting after one or two years.

“One thing they cannot understand is why people wouldn’t leave work on time,” he said. “Someone of the Chinese work culture background wouldn’t understand them.”

Before Korea and China established diplomatic ties 19 years ago, most Korean studies and language classes where taught by ethnic Korean professors from the Yanbian Korean Autonomous Prefecture in Jilin Province, Northeast China. Yet as more Han Chinese scholars and Korean scholars have freely interacted with each other, the Korean studies scene in Beijing has faced challenges, Lee said.

“Through the series of academic debates and interactions, Korean-born scholars and Han Chinese scholars discovered there are some significant differences between the Yanbian Korean language and Korean language used in Korea,” he said.

“There should be an harmonious measure to compromise the differences and give the students quality education.”

Despite many challenges and problems, Lee said the admission for his program has been getting more competitive each year.

“Knowing Korean is definitely an asset in China and in Asia as a whole,” he said. “Yet tolerance and a considerate mind can help the students even more.”


BEIJING ― It is very easy to mistake professor Shen Ding-chang for a Korean man. His Korean is flawless, with almost perfect grammar and pronunciation.

One would be even more surprised once they find out Shen only started studying the language when he entered Peking University, as he was forced to during the Cultural Revolution.

“I had no choice in what I wanted to study,” Shen told The Korea Herald in his Peking University office in Beijing. “That’s what the government wanted me to study, so I went for it.” 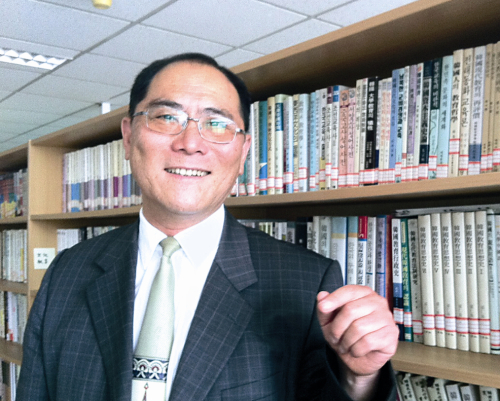 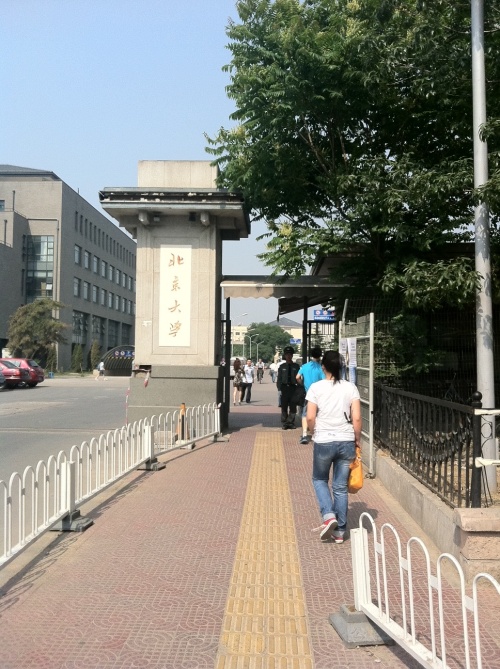 “We opened in 1991, before Korea and China established their diplomatic ties,” Shen said. “At the time, we could not use the word, ‘Korea.’ We had to use the word ‘Joseon’ instead. It was called ‘Institute of History and Culture of Joseon.’ The center was renamed with its current title in May of 1993.”

In the early years, the center mainly focused their research on Korean history. “Then we expanded our research to Korea’s foreign policies, politics, culture, economy and China-Korea relations, as the time passed by. We also began to translate well-known Korean books on Korean history and philosophy into Chinese. I’d say we’ve translated some 30 books in total.” 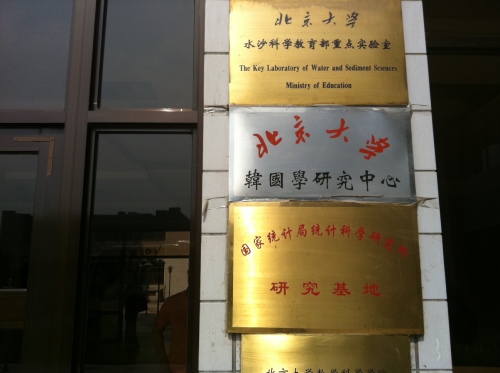 The sign for Center for the Korean Studies at Peking University in Beijing, China. (Claire Lee/The Korea Herald)
Since 1991, the center has been publishing a collection of scholarly articles on various matters of Korea every year. “We’ve published 22 editions so far,” Shen said.

Shen stressed that it is important for Korean and Chinese scholars to interact as much as possible for the future development of both countries. “Korea and China have a long shared history,” he said. “Yet each country has different interpretations and understanding of them. So more interactions would allow scholars from both countries to learn about each other, and ultimately, their own history as well.”

While there have been several conflicts between the two countries on their shared culture ― including the case of Dano, one of the shared holidays of China, and Arirang, Korea’s national folksong in which China recently listed as their National Intangible Cultural Assets ― Shen said he doesn’t think of it as a huge problem in the academic field of the two countries.

“It’s a matter of interpretation,” he said. “Not every Chinese scholar thinks the same way on the shared history of the two countries. It’s the same with Korean scholars. Every scholar has their own views and interpretations on their research regardless of their nationality. It’s an open and diverse field and I don’t see it as a bad thing.”

The center however does not do any research on North Korea, Shen said.

The Korean language and culture program at Peking University is extremely competitive to get in, as only about 15 undergraduate students and 7 graduate students get accepted every year. The original form of the program was the “Korean language discipline” of Nanjing National College of Oriental Studies, which was founded in 1945. It became merged into Peking University in 1949.

Shen said the school has no plan to expand the small program, as far as he knows.

“The school is keeping the class size small because they think it’s one of the most efficient ways to teach a foreign language,” he said. “All of our undergraduate students are local Chinese. There are some Korean students in the graduate program.”